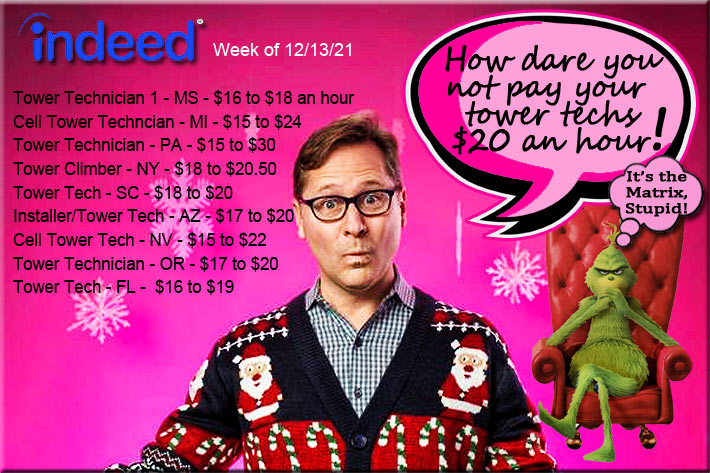 T-Mobile CEO Mike Sievert said its $20 an hour minimum wage to all of its employees “is about inclusion, and we wanted to draw a line that ensures no employee is left behind.” Until now, Sievert must have been unaware that wireless contractors’ employees working on T-Mobile projects have been left behind because they are required to work for an hourly scale from $15 to $19 in many markets as they enter the highly technical, dangerous profession.

Commentary – T-Mobile CEO Mike Sievert received a round of thanks from his employees and future job applicants when he announced on Friday, “Every single employee at T-Mobile, even our newest team members just starting to build their skill base, should have a competitive wage. So, we have decided to implement a nationwide minimum pay at T-Mobile of at least $20 per hour.”

He should also receive a golden raspberry award from wireless contractors for highlighting the Un-carrier’s under-achievement in assessing – or possibly ignoring – how his company’s predatory ‘take it or leave it’ matrix pricing has crippled the ability for contractors to provide a career path for their employees that is financially rewarding.

Although the carrier doesn’t have exclusivity on untenable matrix pricing, T-Mobile has caused tower techs’ wages to stagnate.

According to the employment website Indeed, dozens of companies are seeking tower technicians. A review this afternoon of the available positions found that many of them are offering hourly wages for new and experienced techs from about $15 an hour on up.

One of the nation’s largest wireless contractors that performs work for T-Mobile has a help wanted advertisement for a tower tech in Minnesota with a laundry list of qualifications coupled with a minimum of three years’ wireless telecommunications experience.

The starting salary for the position that should make their HR generalist blush in a magenta shade of embarrassment: $15 an hour.

T-Mobile says that its workers’ primary mission is: “Let our customers live unlimited, feel the love, stay connected and go further.” And use the buddy system to be 100% vigilant at all times to avoid paper cuts.

In his blog, Sievert lists all of the benefits the carrier will gain by increasing wages.

Substitute your company’s name for T-Mobile, and they would also be appropriate for you, such as, “We know that it’s our customers who truly benefit from well-rewarded, supported, and enthusiastic employees.”

The contactors’ conundrum is that they can’t afford increases as T-Mobile and other Tier 1 companies stymie their profits and growth.

They’re not feeling the love.