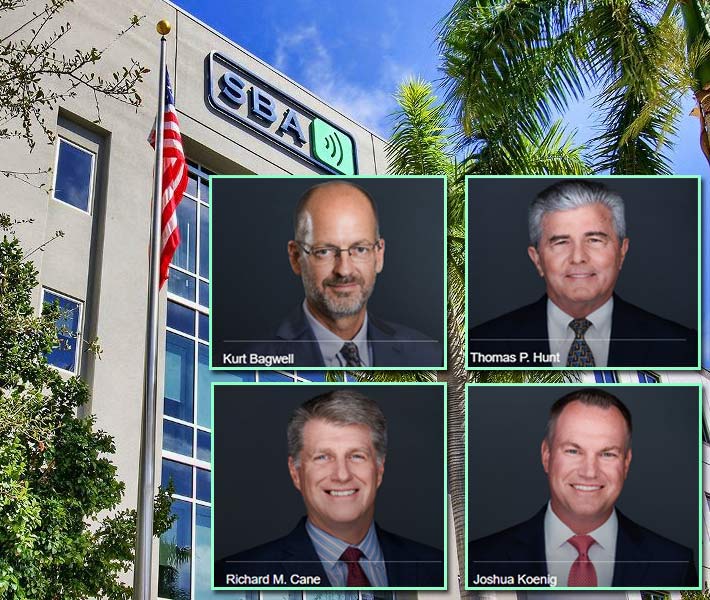 “On behalf of our Board of Directors and all of our constituents, I want to congratulate Kurt Bagwell and Tom Hunt on their very long and successful careers with SBA and extend the deepest appreciation for all their contributions to our growth and success,” commented Jeffrey A. Stoops, President and CEO.

“Following his service as our Chief Operating Officer when we were a U.S.-only business, Kurt has been the leader of all our international initiatives, playing a key role in growing SBA into the global organization we are today. Tom joined us after serving as SBA’s primary outside counsel in the early days of our history and has overseen a growing number of key departments, functions and competencies for us, including people, systems and processes, supporting our successful growth from a sub-1,000 tower, small U.S. public company to the global, 36,000+ tower, S&P 500 organization we are today.”

Stoops said, “One of the many accomplishments achieved by both Kurt and Tom over their 20-plus years at SBA is their building of deep, talented bench strength in personnel. That commitment to talent development has enabled us to appoint two industry and SBA veterans, Rich Cane and Josh Koenig, as successors to Kurt and Tom. Both Rich and Josh have held wide-ranging leadership positions in the areas for the positions to which they are appointed and have deep relationships throughout our industry. Given the experience of Rich and Josh, we anticipate the transition will be seamless and our growth, customer service and shareholder value creation will continue uninterrupted.”

Cane joined SBA in November 2019, and currently oversees all of their Western Hemisphere operations outside of the U.S. He has spent over 35 years in telecommunications, including five years in a variety of senior roles at Ericsson, supporting managed services and field operations in North America. Cane also previously served as a senior executive for several wireless network operators, including as Chief Operating Officer for Woosh Wireless in New Zealand, Chief Technical Officer for Bell Atlantic International/Grupo Iusacell in Mexico, Chief Operating Officer for PrimeCo Personal Communications in Chicago and customer sales/service leadership positions for Motorola / Nokia Networks. Cane began his telecommunications career with Bell Atlantic (now Verizon), progressing through a variety of management positions in network, finance and marketing.

Koenig joined SBA in January 2010, and has since held positions of increasing responsibility. He currently serves as SBA’s Senior Vice President, Legal – International, where he oversees all legal aspects of SBA’s International business, including in the areas of mergers & acquisitions, compliance, litigation, operations, employment, corporate governance and government regulatory affairs, and is deeply involved in their international strategic, operational and growth initiatives.

Prior to serving as Senior Vice President, Koenig served as Vice President & Associate General Counsel – International, and began his career at SBA as Corporate Counsel – Finance and Compliance where he oversaw all legal aspects of finance, compliance and corporate governance. Prior to joining SBA, Koenig was an associate with the law firm of Simpson Thacher & Bartlett, specializing in corporate and financing transactions. Koenig is a member of the New York Bar and authorized house counsel in Florida.

Bagwell has spent almost his entire career in telecommunications, and during his 21-year career at SBA has served in a number of roles with them, including running the services group, Chief Operating Officer while they were a U.S.-only business and, most recently, President – International where he has overseen the entry into and growth of all of SBA’s 15 International markets.

Hunt joined SBA in September 2000 as their General Counsel, after having served as their primary outside counsel while a partner with Gunster, Yoakley & Stewart, P.A., a Florida law firm where he practiced for 16 years in the corporate and real estate areas. Throughout the material growth of SBA during his tenure, Tom has overseen increasing areas of responsibility and scope including legal, regulatory, compliance, safety, risk management, land use, human resources and mergers and acquisitions.

The appointments of Cane and Koenig will become effective January 1, 2023, and  Bagwell and Hunt will remain employees through March 2023 in order to further support the transition.