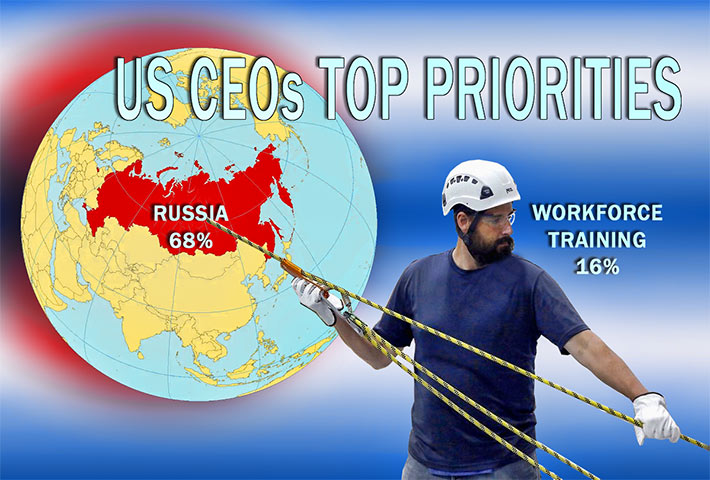 Although workforce training is low on the priority list for billion-dollar-plus in revenue companies, according to a Committee for Economic Development poll, the wireless infrastructure industry believes it is a high priority.

As the war in Ukraine continues to escalate, a new survey of CEOs and Directors, released by the Committee for Economic Development, the public policy center of The Conference Board (CED), found that Russia is the top policy priority they want the President and Congress to address this year.

Labor shortages were also a top priority. However, workforce training was one of their lowest priorities, a seemingly incongruous finding since companies under the wireless infrastructure umbrella continuously promote the need to maximize the development of their existing workforce through training to remain competitive in the future.

In addition, wireless workforce training is a high priority of many states, such as in Ohio, which recently selected the Wireless Infrastructure Association to work closely with Ohio State University to advance the skills gap in order to build out the state’s broadband.

NATE: The Communications Infrastructure Contractors Association is also working with Ohio in establishing a pilot training program that will be launched with three Ohio schools in conjunction with the Governor’s Office of Workforce Transformation.

So, why is training in the cellar in the survey?

Possibly because the survey was obtained from more than 80 CEOs and Board Directors, more than 90 percent of whom are at companies with more than $1 billion in revenue.

In wireless construction, there are companies that enjoy a revenue of $1 billion, such as Black & Veatch, SBA Communications, and MasTec, which doubles $1 billion almost every quarter. But it is unknown if they were included in the survey.

If MasTec Chairman José Mas took the survey, which represented the views from 80 of America’s approximately 340 $1 billion-plus companies, an accurate overview based upon a 23% participation, it’s likely that training would have been a higher priority based upon the company’s long history of training initiatives. 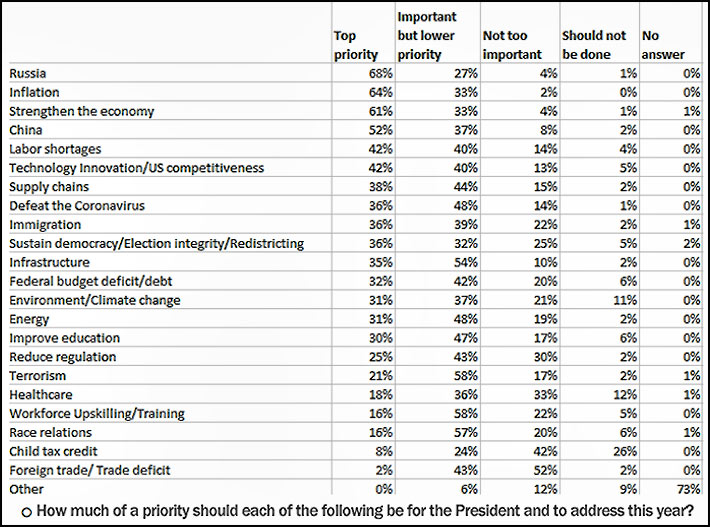 As detailed in the survey, Russia concerns superseded inflation and strengthening the economy, which follow closely behind.

More than two-thirds of the surveyed business leaders view Russia as the biggest policy priority for 2022. Simultaneously, roughly 67 percent of respondents agree with the President’s handling of the situation in Ukraine.

Closely related to the importance of Russia on the list of concerns and the disruptions it is causing in the global and domestic economy, more than 80 percent of surveyed business leaders agree the Federal Reserve needs to move faster on inflation.

On the pandemic front, the vast majority of respondents—over 90 percent—believe the nation is ready to treat COVID-19 as an endemic virus. What’s more, the results reveal mixed feelings from corporate America about the success of vaccination and testing mandates for companies with more than 100 employees: 38 percent said the mandates did not help nor hurt vaccination rates in the workplace, and only 7 percent said the vaccination mandates helped a great deal.

Since the start of 2022, the nation has dealt with the Omicron wave of the pandemic, rising inflation, and now, war in Ukraine. Despite the multitude of compounding crises, the data shows CEOs and Directors are unified in several key areas—notably, the urgency of the war in Ukraine, and support for faster action on behalf of the Federal Reserve to address inflation. The President and Congress must take swift action to capitalize on this support to address these urgent concerns.

Key findings from the survey include:

FOREIGN POLICY: More than two-thirds of respondents see Russia as the top priority for the President and Congress to address in 2022.
• Business leaders view Russia, inflation, and strengthening the economy as the biggest priorities for the President and Congress to address this year.
• Of the policy priorities that should not be a major focus in 2022, respondents ranked a child tax credit and the trade deficit the lowest.