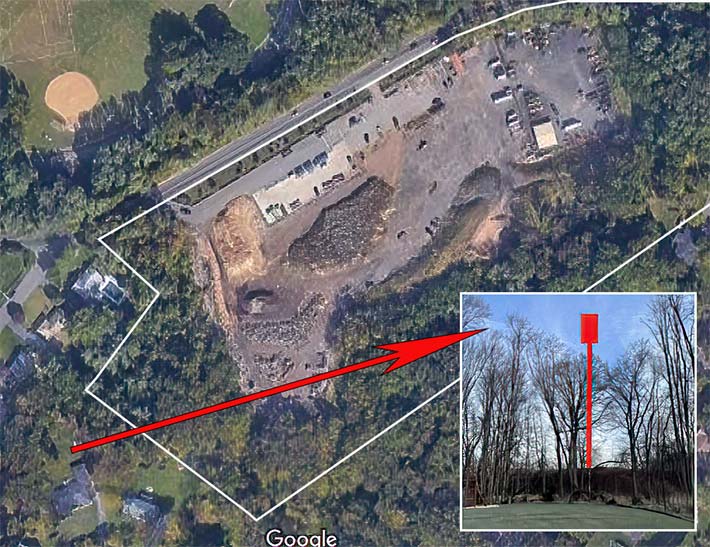 BATTLING BORDER VIEW – A Scotch Plains, NJ plaintiff provided a rendering (inset) of how an AT&T tower would appear from their backyard bordering the neighboring community of Westfield in their lawsuit to block the erection of an AT&T 130-foot tower that seems to be a monopole with a shroud. However, it may be a little misleading since there is at least a 350-foot woodland buffer. In addition, the tower’s location on the recycling center property has not been decided, and it could be up to 1,400 feet away from the resident’s property line. Plus, it will most likely be a monopine or “tree,” according to the complaint.

A Scotch Plains, NJ homeowner has filed a lawsuit in Superior Court to block the Town of Westfield’s plan to lease space to AT&T for the construction of a cell tower at the Conservation Center – an adjacent recycling compound.

David Munsky, whose home borders Westfield and the recycling facility’s property, claims the monopine will “tower over” his and other residential properties in Scotch Plains.

He is also requesting a judgment that the monopine violates a stipulation with Scotch Plains, and Westfield should be required to consider other alternative locations.

Last month, Westfield’s Town Council approved the lease agreement with AT&T. The carrier would pay the town $45,000 a year with annual rent increases of 3% and additional rent to be received from other companies co-locating on the tower.

Also, the deal was sweetened by AT&T being required to provide a $100,000 contribution to fund a bathroom facility, additional parking, and other improvements for the Houlihan/Sid Fay sports complex where AT&T initially requested to build the monopine.

The town advertised bids for that location to other carriers and towercos, and when it came to opening the responses in August 2021, there were none.

The town then received feedback – most likely from AT&T – that the Westfield Conservation Center would be a more appropriate location, and a second bid was advertised with a September 2022 opening date.

However, only AT&T submitted a bid, and the town agreed on November 9, 2022, to a five-year lease, with four automatic five-year renewal periods.

Munsky’s lawsuit claims that Westfield ran afoul of its zoning and an agreement with Scotch Plains.

“The Property is in the RS-24 zone, which is single-family residential only, where the maximum height is 33.5 feet. In 1964, Westfield stipulated in a settlement with Scotch Plains that the Property would remain as is and would not contain any ‘industrial’ use,” the lawsuit states.

The lawsuit acknowledges that the Westfield zoning code states that “[a]ny use or development by the Town of Westfield shall be a permitted use in all zone districts and shall be exempt from the zoning regulations, design standards for subdivisions and site plans, and any requirement set forth in this ordinance to obtain site plan approval.”

Their argument is, “The tree monopole, however, will not be significantly used by Westfield and is not being developed by Westfield.”