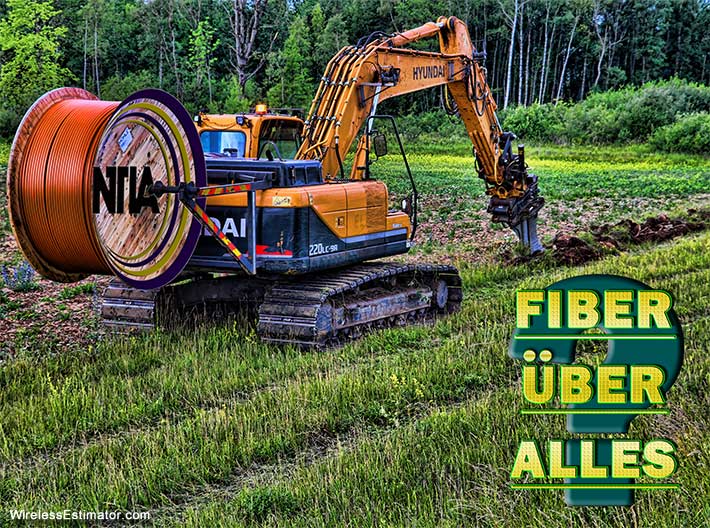 In a move that might not be legal, the U.S. Department of Commerce’s National Telecommunications and Information Administration (NTIA) took the wireless infrastructure industry by surprise when it announced Friday that it preferred fiber to close the digital divide. It’s possible that the Fiber Broadband Association anticipated the move when they promoted NTIA priority projects in their Broadband Infrastructure Playbook that was published almost three months ago.

The Biden administration formally started its $42.45 billion initiative on Friday to bring reliable and affordable high-speed broadband internet to everyone in the U.S. by the end of the 2020s.

“In the 21st century, you simply cannot participate in the economy if you don’t have access to reliable, affordable high-speed internet,” Commerce Secretary Gina Raimondo, who is overseeing the distribution of the funds, said, as she promoted the Broadband Equity, Access and Deployment (BEAD) program in Durham, N.C.

However, the expected treatment of equity in reliable technologies that can be used to close the digital divide is biased, according to a swift reaction from some of the nation’s trade associations.

The National Telecommunications and Information Administration (NTIA), which issued its Notice of Funding Opportunity (NOFO), appears to be emphasizing fiber networks, lessening the ability for companies providing other technologies to fully participate in Raimondo’s NTIA funding.

“With respect to the deployment of last-mile broadband infrastructure, the program prioritizes projects designed to provide fiber connectivity directly to the end-user,” the guidelines state.

The NTIA’s Broadband Equity, Access, and Deployment (BEAD) guidelines identify numerous reliable network technologies that can be used but is heavily promoting fiber.

NATE: The Communications Infrastructure Contractors Association was one of the first trade groups to register its concerns.

“NATE and our over 1,100 member companies encompassing all 50 states have routinely asserted that the effective, efficient deployment of broadband funds as a means of bringing connectivity to all areas of the country must by necessity be technology-neutral. As the BEAD program money begins to flow to the states, it is imperative that broadband deployment be technology-neutral – incorporating both fiber and wireless technologies such as fixed wireless because we must use the technology that fits the unique geography and topography of each area and ensure that we are using taxpayer resources effectively and efficiently,” said President & CEO Todd Schlekeway in a statement provided to Wireless Estimator.

“Funding leveraged through the BEAD and the middle-mile programs, combined with other funding programs, must support ubiquitous 5G. All Americans, especially those in rural and hard-to-reach areas, must have access to nationwide connectivity, which means access to both fixed and mobile services. Fiber is an important input to support the deployment of 5G and successor wireless technologies throughout the U.S., but in areas where fiber is not possible, wireless will play a key role. To meet the communications needs of Americans everywhere, it is important for policymakers to leverage the IIJA programs and all other tools and programs available to support ubiquitous access to fixed and mobile wireless services in the U.S.,” the CCA said in a statement. 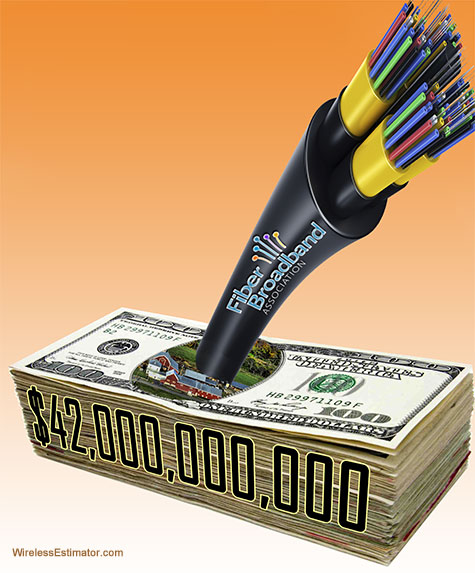 The Fiber Broadband Association and NTCA-The Rural Broadband Association have been lobbying to get fiber prioritized, and the NTIA appears to have championed fiber as the most reliable broadband architecture. Although CTIA and WIA and other associations have been talking to state broadband leaders about the benefits of mobile broadband, FBA and NTCA have issued what they believe is a more compelling argument in their Broadband Infrastructure Playbook. The 42-page guide cautions that states should assess whether their project is a priority broadband project. “States must fund priority broadband projects before other projects,” the playbook states. NTIA states that priority projects are those that use end-to-end fiber optic architecture.

The Wireless Internet Service Providers Association (WISPA), in a statement, did not call out the NTIA’s fiber prioritization but said that the NOFO provides States with the maximum latitude to meet the unique needs and challenges they face in delivering broadband services.

“Most of our fixed wireless members leverage licensed and unlicensed spectrum, allowing them to deploy reliable broadband quickly in response to subscriber needs.  Communities should not have to wait for years to gain access to reliable broadband and the many benefits it affords.  Waiting for broadband access results in lost opportunities,” WISPA emphasized.

The association said that an adaptable, technologically-neutral approach is the best way to realize the promise of the BEAD program. NATE agrees.

“It is also important to note that the bi-partisan IIJA that was signed into law included a technology-neutral approach, which would allow the flexibility necessary to allow wireless providers an opportunity to compete for the funding. As this process moves towards the states, NATE is well-positioned through our 50-state grassroots advocacy Wireless Industry Network program to continue to monitor progress and best shape the guidelines that will best serve to close the digital divide,” said Schlekeway.

“WIA supports NTIA and the Administration’s laudable goal to provide broadband for all. It is hard to reconcile the NOFO’s explicit preference for one broadband technology with the requirement in the law for technological neutrality,” said WIA President and CEO Jonathan Adelstein. “WIA strongly supports the support for workforce development and apprenticeship in the NOFO. To connect all Americans, we need to have a workforce in place with the skills to build and maintain broadband networks. We look forward to working with NTIA to ensure that the broadband workforce is developed to provide connectivity to everyone efficiently and cost-effectively.”

As expected, the Fiber Broadband Association (FBA), whose tagline is: “If it’s not fiber it’s not broadband,” was ecstatic.

“Today’s Notice of Funding Opportunity is one of the first steps in a complex but exciting opportunity to close the digital equity gap once and for all. The Fiber Broadband Association intends to carefully review the proposals set forth by the NTIA and continue working with the Agency to offer our counsel on how to best move this program forward and achieve successful implementation of the law. The Fiber Broadband Association is prepared to offer timely resources and guidance to state broadband offices as they look to leverage this funding, push fiber broadband further and connect every community to limitless possibilities,” said FBA President & CEO Gary Bolton.

“Our playbook will be an educational tool for State governments to understand the many benefits of directing funds towards high-speed, future-proof fiber infrastructure and how to create successful broadband programs that will connect their communities to limitless potential,” Bolton said last December.

On March 21, 2022, the Committee on Energy and Commerce notified the NTIA that they believed that funding should be technologically-neutral, stating, “We believe that Bipartisan Infrastructure Law funding should prioritize projects that implement fiber networks and other technologies…”.

A month later, on April 26, 2022, ranking members of the Committees on Commerce, Science; and Transportation, Energy and Commerce, and Subcommittees on Communications, Media; and Broadband, and Communications and Technology, chastised the NTIA in its handling of its Broadband Technology Opportunities program, “which misused billions of dollars, overbuilt existing networks, and did little to close the digital divide.”

The members cautioned, “We cannot afford to repeat this mistake.”

“The program should consider all technologies that can meet the IIJA’s network requirements at a reasonable cost. A technology-inclusive approach will maximize the impact of the funding and efficiently connect more Americans faster,” the members said.

NTIA’s decision will be exempt from scrutiny

Because the IIJA exempts the BEAD program from the Administrative Procedures Act, it prevented the public from providing their input on the rules that now govern BEAD and they are not provided any insight into how NTIA made its decisions.

Therefore, it’s likely that a Freedom of Information Act request will not provide transparency as to how the NTIA decided to prioritize fiber.

However, it’s known that the FBA and NTCA have been lobbying the NTIA for many months. In early April, the organizations sent a letter to Alan Davidson, Assistant Secretary of Commerce for Communications and Information, pressuring him to focus on fiber and broad-brushing other technologies and providers as incompetent.

“Perhaps the most important lesson learned from the Rural Digital Opportunity Fund program is that a premium should be placed on giving funds to competent and financially sound providers that are deploying network technologies that have actually been deployed,” FBA and NTCA said. “Not one of our providers would hand over a build and operations to an inexperienced provider using an unproven technology. The NTIA and States should not either.”

“Being technology-neutral does not mean we should not account for the capabilities of each technology,” the letter said. “The reality is that the capabilities of all-fiber networks far outpace any other technology, both in proven (rather than speculative) performance and their ability to keep pace with rapidly evolving consumer demands.”

In the Infrastructure Investment and Jobs Act (IIJA), it is identified that to every “extent practicable” the advancement of broadband should be carried out “in a technologically neutral manner.”

It also states: “The term ‘priority broadband project’ means a project designed to provide broadband service that meets speed, latency, reliability, consistency in quality of service, and related criteria as the Assistant Secretary shall determine; and ensure that the network built by the project can easily scale speeds over time to meet the evolving connectivity needs of household and businesses; and support the deployment of 5G, successor wireless technologies, and other advanced services.”

To participate in the BEAD Program, states and other eligible entities must submit a letter of intent and a planning funds budget, which will unlock $5 million in planning funds and allow states to begin creating their five-year action plan.

Each participating state is guaranteed a minimum $100 million allocation, with additional funding determinations made based on the forthcoming coverage maps from the Federal Communications Commission.

Funding is distributed primarily based on the relative number of “unserved” locations that lack access to broadband service at speeds of at least 25 Mbps downstream and 3 Mbps upstream and latency levels low enough to support real-time, interactive applications in each State and Territory.

July 18, 2022 is the deadline for an eligible entity to submit a letter of intent to participate in the BEAD program.

“Generations before us brought electricity to rural America and built the interstate highways,” said Davidson. “Our generation’s task is to connect all Americans online. Thanks to the Bipartisan Infrastructure Law, today NTIA is launching major new programs to promote Internet access and adoption so that everyone in America has a chance to thrive in the modern economy.”

The Internet for All program launched Friday has three NOFOs:

Wireless Estimator reached out to CTIA for comments, but did not receive a response by press time.