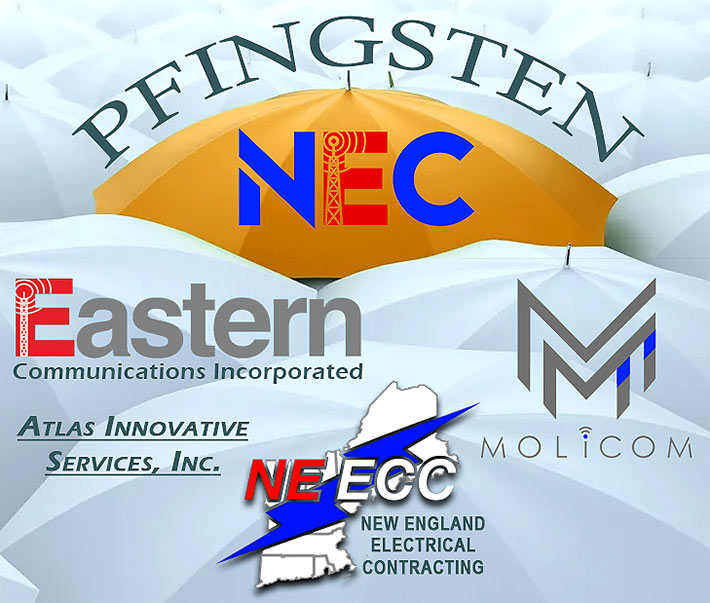 NEC, funded by private equity firm Pfingsten Partners, has acquired Eastern Communications. The addition of Eastern to their portfolio of companies under NEC’s management umbrella, raises their employee base to 225, making them one of the larger full-service contractors in the nation.

“We are just getting started,” said Keith Barnard, a member of the NEC executive team.

With strength in numbers, combined with the reputation and proven leadership experience, the company is well-positioned to continue its growth trajectory,  Barnard explained.

Additionally, NEC has continued its market reach into South Florida with operations based in Punta Gorda, FL, supported by five crews.

The value of combining many companies under one banner is clear as NEC moves forward to provide quality and safety-driven turn-key service to the nation’s wireless infrastructure.

The company currently employs over 225 seasoned industry professionals and intends to continue its growth organically and by partnering with other successful, well-positioned businesses in strategic markets.

“The core values of NEC are the small company feel combined with big company strength and execution,” said Kevin Farrell, CEO of NEC. “We value the blue-collar environment that this industry was built on and are committed to keeping that feel within the organization as we continue to grow.”

“We are looking to rapidly scale alongside our customers with additional resources, broader service capabilities, and enhanced geographic coverage by partnering with like-minded organizations across the United States,” said Steven Slade, an NEC executive.

“We are thrilled to join forces with NEC,” said Steve Slade, President and CEO of Eastern. “Together, we are well positioned to rapidly scale alongside our customers with additional resources, broader service capabilities and enhanced geographic coverage.”

“Eastern’s reputation for high-quality service, customer responsiveness, and integrity made it a natural fit for the NEC platform,” added Ryan Lavelle, Principal at Pfingsten. “We look forward to partnering with the team during the next stage of their growth.”

Pfingsten became the majority shareholder of NEECC in October 2021. The Eastern Communications transaction represents NEC’s third add-on acquisition and part of the company’s strategy to build a national provider of critical services to the telecommunications industry. In addition, Slade will retain part ownership in the company and join the NEC executive team.

On October 6, 2021, the private equity firm announced its investment in New England Electrical Contracting, LLC as the majority shareholder. Terms were not provided, but in a press statement, the company said that NEECC President Kevin Farrell retained a “significant” equity ownership in the company.

On June 28, 2022, NEECC partnered with Modern Link Communications, LLC (Molicom) to invest in and support the company’s growth, Farrell said. Molicom President and owner Keith Barnard said in the partnership announcement that he was retaining ownership of the company, but he did not identify the percentage. “Together, we will be able to better serve our combined customer base with additional resources, broader service capabilities and enhanced geographic coverage,” Barnard said.