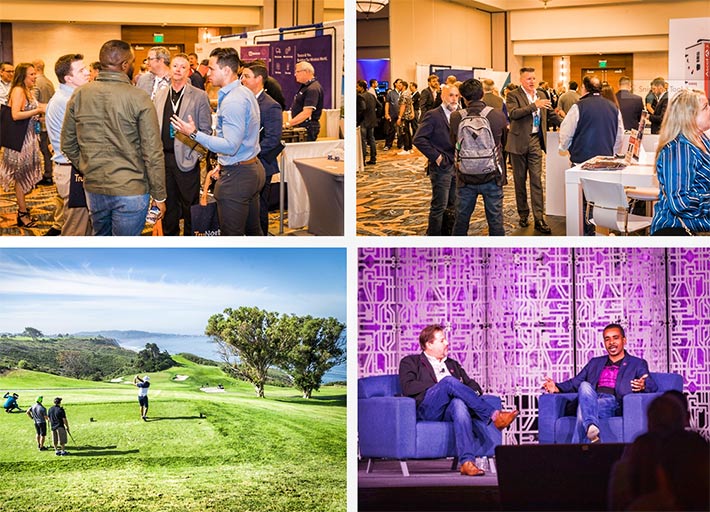 The 2022 Wireless West Conference was a huge success with over 600 people attending on the first day. Photos: Joe Katchka

With an extra air of excitement after two years of post-pandemic uncertainty and social distancing, the 7th Annual 2022 Wireless West Conference, presented by four West Coast wireless associations, came back full force in person this week. Widely known for producing high-level experiential events and brand activations, both in and outside the wireless industry, eFactor knocked it out of the park once again with a successful first day, bringing over 600 executives and thought leaders in the wireless industry back together for valuable discussions, networking opportunities, and educational sessions. 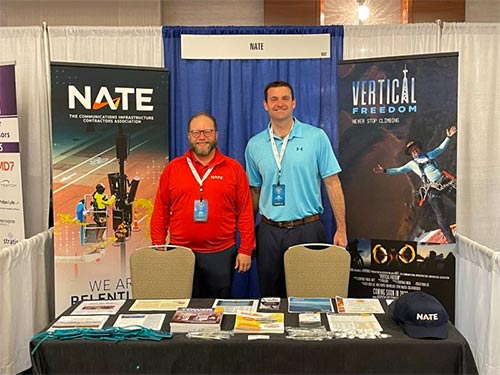 Getting ready for the opening of the exhibit hall are Chris Mallon, President of Tower MRL and Todd Schlekeway, President and CEO of NATE

“I am so happy to see our industry getting back together. Wireless West is one of the best conferences in our industry to attend, in terms of both content and contacts,” said Ken Czosnowski, Executive Vice President for J5 Infrastructure Partners.

Day two of the conference kicked off with a warm welcome by eFactor’s President & Founder, Kari Willis, followed by the Opening Session “T-Mobile Talk” with Keynote Speakers, Darryl Hawkins (SVP for the West Region) and Moderator Brandon Braunlich (Senior Director), to discuss the company’s current position as the leader in 5G and most awarded 5G network.

Hawkins discussed his new role as Senior Vice President for the West Region, and his industry background — with over 25 years in the wireless industry including his start at Verizon after getting out of the Marine Corps. He discussed Bell Atlantic’s merger with GE to form Verizon, T-Mobile and Sprint’s merger in April 2020, the company’s Magenta Build focus, and his current focus on both transforming the industry and the journey through that transition.

The promise of 5G goes beyond the smartphone in that “most of the things we will be able to do from a 5G capacity haven’t even been created yet, including connected cars, artificial intelligence (AI), hospitals, security, T-Mobile for Business and Government, and Fleet Management – to name a few”, said Hawkins. “We have 100 billion in Spectrum holdings, way more than Verizon (20% more) and AT&T (30-40% more).”

What’s next for T-Mobile? “We’ll continue to define, measure, analyze, and improve our services, and within the next 5 years, we will cover 99% of users in 5G with the strongest spectrum asset holdings,” remarked Hawkins. We’ll be spending $200M plus in our BYOC (Bring Your Own Coverage) strategy in the coming years.”

The discussion focused on education between Edge Data Centers and a typical Data Center. “A Data Center is this: if you boil it down into its simplest form, it’s like a building. Four walls, with backup generators and cooling centers,” said Ben Green. Doug Recker went on to remark, “with a micro data center, you are shrinking it down. It’s a mini brick-and-mortar, with power and cooling for retail customers. We’re putting the data center closer to the end-users.” Kristen Sanderson chimed in, “the biggest difference between the two is size and proximity. Edge Data Centers are based on need.” Examples cited included CSX, where data could be digitally captured without users needing to be physically present. Mobile operators are the “hub and spoke” of the main brick-and-mortar business and are customer-driven.

The morning’s second session was a packed house and was led by an all-women panel of five top women in wireless to discuss “Developing Future Leaders in Telecom – Investing in Your People”, sponsored by Moderator, Kari Willis (E Factor), Amanda Cahill (Network Connex), Carrie Charles (Broadstaff), Lynn Whitcher (MD7) and Stella Bezabeh (Verizon). Several of the panelists spoke about having to self-lead in their careers, actively putting themselves in front of other people who could help them grow, and how leaders need to invest in the growth of their employees and future leaders.  WWLF has a mentor and mentee program and is actively looking for participants.

The morning’s third session included a relaxed and lighthearted play on “speed-dating” with a limited-availability Speed Networking session, where attendees could register for short introductory meetings with multiple industry leaders who fit the profile of their specific networking needs.