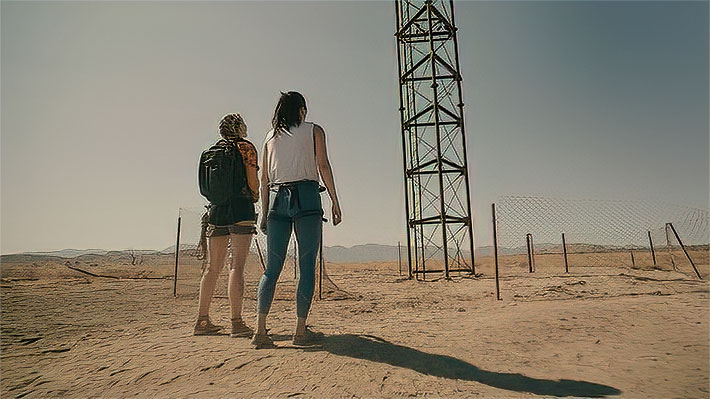 Both women will eventually get back to the ground after being stranded on top of this 2,000-foot tower; unfortunately, only one with a pulse. Photo credit: Lionsgate.

Tower erectors and maintenance purists will likely give the low-budget thriller Fall a failing one star for accuracy. However, critic reviews are favorable for the movie released on Friday, where two young women are stranded on top of a 2,000-foot abandoned tower in an absurd but undeniably effective nightmare.

The New York Times described it as a “nerve-shredding thriller.”

If you can get through the first 15 minutes of its mundane setup and overlook one guy wire level on a 2,000-foot structure supported on sand in the desert with no accompanying shelter or power supply to feed an OB-1-type light at the top – and non-existent grade 98-marked bolts spitting out of a collapsing climbing ladder, you could easily get caught up in the seat-edge suspense that it provides.

The Lionsgate film came in 10th last weekend with $2.5 million in ticket sales on a film that cost only $3 million to produce.

Becky (Grace Fulton) suffers a devastating loss when her husband falls to his death in a rock climbing accident, leaving her and her best friend Hunter (Virginia Gardner) getting together a year later. Hunter, a successful YouTuber specializing in extreme stunts, talks Becky into confronting her fear of heights and the trauma of her husband’s passing by climbing the tower in the middle of the desert – the very first provenly successful treatment that any clinical psychologist worth their salt will employ.

It’s then an action-packed spectacle with inane dialogue. But knowing there is no 100% tie-off, seasoned climbers will likely experience the “oh fu*!” feeling during multiple near-death falls that weren’t stopped by a 6-foot lanyard.

The actresses used F-bombs over 30 times during the filming during live-action shots because they thought they were falling or could be seriously injured. Director Scott Mann used computer software to generate new exclamations for the actors, avoiding the need to reshoot any sequences for the B-movie. The reason? It landed a PG-13 rating and a wider audience.

Most of the film was shot on a 60-foot high platform constructed on top of a mountain that provided a realistic and stressful setting.

Without it being a spoiler, only one climber survives the harrowing ordeal involving ghoulish and suspenseful sequences.

Mann’s art of combining computer sequences with live-action footage to create scenes that can’t be filmed in real life ensured the movie’s success. It is expected to turn a profit even though there was an additional $4 million in promotional expenses.

Mann said during an interview this week that the vultures that played a chilling role in the movie were real and not spliced into a scene. He also said he believed Fall would be a success due to most individuals’ fear of heights and the success of a YouTube video of a tower climber changing out a lightbulb.

It’s plausible the one he was referring to was a two-minute drone video produced by Todd Thorin of VIKOR that featured Kevin Schmidt changing out a light bulb at the top of a 1,500-foot tower. The video has had over 18 million views.