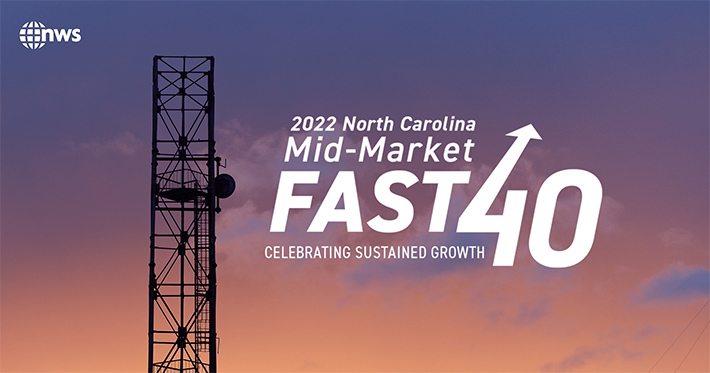 Grain Management-backed Network Wireless Solutions (NWS), a fast-growing solutions and logistics provider to carriers and telecommunications contractors, has earned the No. 3 spot on the 2022 North Carolina Mid-Market Fast 40 ranking.

Sponsored by Business North Carolina magazine in partnership with the accounting firm Cherry Bekaert LLP, which verifies the results, the Mid-Market Fast 40 ranking recognizes companies based in North Carolina that have annual revenues in the range of $10 million to $500 million and a sustained record of rapid revenue and employment growth over the past three years.

This year’s award marks the first time that NWS has been named to the annual list. “We are so honored to be recognized as one of the fastest-growing companies in North Carolina,” said Xavier Williams, CEO. “This honor reflects the dedication, hard work and innovation of our entire team, which has an unwavering commitment to serving and supporting our customers during this very exciting time for telecommunications services.”

While the Mid-Market Fast 40 award is based on performance through the calendar year 2021, NWS also has taken several big steps during 2022 that will keep the company on an ambitious growth trajectory, according to Williams. These include the recent acquisition of two companies — Gap Wireless and JF TECH — that expand NWS’ reach in Canada.

Based in Mississauga, Ont., Gap Wireless works with vendors to stock and distribute thousands of wireless infrastructure and test and measurement products to customers across Canada.

JF TECH, based in Blainville, Que., manufactures components for servers, wireless networks, and cellular optical fiber systems for the wireless and wireline sector in Canada.

In addition to these acquisitions, NWS also is expanding its distribution footprint. In the fourth quarter of this year, it plans to open a new 50,000-square-foot distribution center in Westmont, Ill. With this addition, the company will have five distribution centers across North America, including facilities in Greensboro, N.C.; Carrollton, Texas; and its two new Canadian sites.

To support the increased scale of its operations, NWS also has made several promotions within its team this year, including the creation of two new executive positions. Bill Elkin, formerly chief financial officer, has taken on the newly created role of chief operating officer. Sam Clark, formerly vice president of sales, has taken on the new role of chief revenue officer.

“We are continually optimizing NWS’ operations to better serve customers in the wireless and broadband industries,” Williams said. “We are proud of the successes we have had to date and look forward to even more growth led by this talented, dedicated team.”