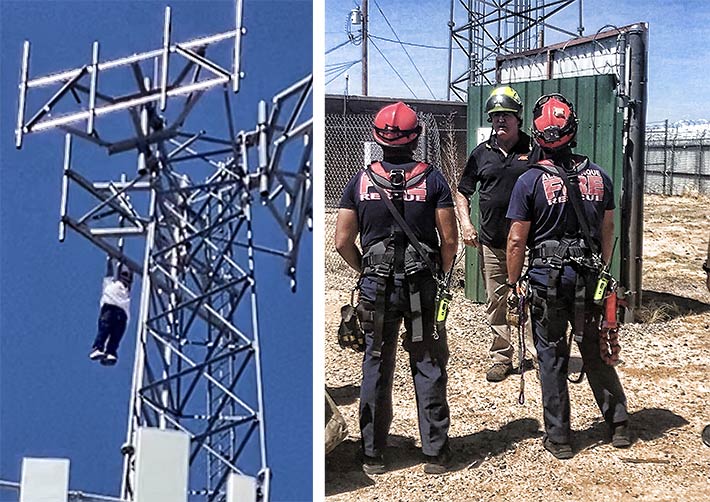 Pat Barr of ASK Tower Supply (right photo, center) is frequently contacted when there is an emergency due to his wealth of knowledge about immediate planning for specific rescue situations, such as an incident last week when an unauthorized climber on an American Tower structure refused to come down and hung by his fingertips from an angle iron mount.

To gain and keep loyal customers, successful companies go above and beyond with customer service and support.

Pat Barr, who humbly entitles himself as Albuquerque, NM-based  ASK Tower Supply’s technical specialist, takes that to a higher level, and in the process, is most likely saving lives of emergency services personnel and those individuals who they safely return to their loved ones after a successful rescue.

Such was the case last week when an agile but unbalanced man climbed an American Tower Corp. 198-foot self-supporting tower in Albuquerque and sat on top of the structure for about 45 minutes.

Barr, who is invited and participates in safety training exercises with Albuquerque Fire Rescue (AFR) and many other organizations that his firm provides rope, climbing and safety equipment to, was alerted to the incident by an individual on site, and headed to the compound to provide his observations and assist with any questions the six-member harnessed rescue team might have since they’re well aware of his extensive tower climbing and rescue experience.

Although they might have already been mindful of RF issues, serving in an unofficial capacity, Barr stressed the need to cut off power to the site, and for the men to not climb or attach to the waveguide ladder if they were going to attempt to ascend the tower. He also identified some of the unusual circumstances that he observed.

In addition, he said it wasn’t advisable to use the safety climb wire on the structure since the man had previously braced himself against the tower and pulled back the wire many feet “as if he was pulling back a bow”.

Miraculously alive after hanging from a thread

Barr informed Wireless Estimator that the man hung for over one minute by his fingertips on a six-foot standoff iron angle mount near the top of the tower and became exhausted, and could not pull himself back up or traverse back to the tower.

He then began swinging his feet back and forth sideways “and he leaped back to the tower from the bottom of the boom,” Barr said.

Anxious  personnel held their breath, as he slid down the tower face’s diagonal to the X-braced intersection and became hung up with his body precariously balanced on inches of steel.

He then began to fall off the structure, but his legs became caught in the bracing.

Rescue personnel were ready to climb the structure and lower him down since it appeared that he would have been seriously injured after being wedged in that position for a short time but the man leaped up and immediately jumped from angle to angle, “wandering around the tower,” Barr said.

Barr said his movements were a cross between “acrobatics” and “ballet-type movements as he nibbled his way down the tower.”

After being on the structure for about two and one-half hours, the man, either on drugs or mentally challenged, was eventually talked down to safety.

“AFR has one of the most skilled rescue teams in the U.S. and I feel like Forrest Gump that I fall into these situations where I can work and learn from these folks, and share some advice,” Barr said.

We’ll use it before we sell it 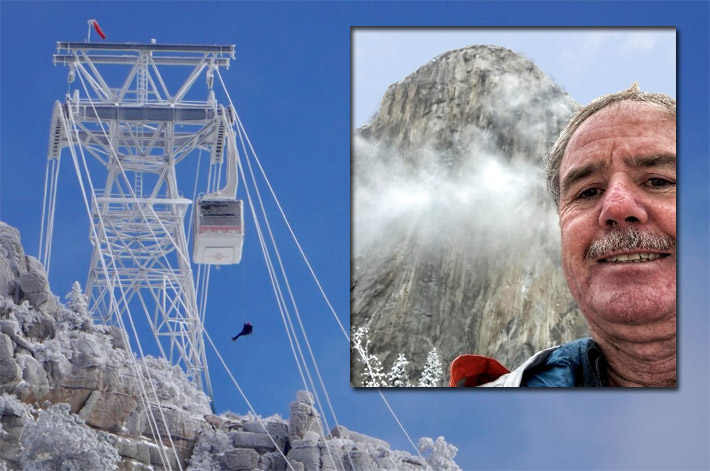 In January when 21 people were stuck in a tramway’s cable car, some for almost two days, one of the first people to be called to offer expertise was ASK Tower Supply’s Pat Barr.

Barr, who says he always carries a full rescue kit with 1,200 feet of rope in his truck, has been called upon to provide advice in many dangerous rescue situations by the clients that ASK provides with safety equipment. “Our company goes into the field and uses every single piece of equipment we sell,” Barr explained.

On New Year’s Eve and most of New Year’s Day, the Sandia Peak Tramway northeast of Albuquerque became stuck when severe icing affected the emergency cable, requiring the rescue of 21 passengers. Multiple agencies, representing over 100 personnel, were involved in the successful rescue.

Similar to last week’s event there was a lot of anxiety during the rescue, but for the many people who know Barr, it’s likely that he provided a calming influence.

Barr’s climbing activities and interest began in the 70s

Barr has always been attracted to physical activities involving heights since his early years as a teenager. He started painting towers in the 70s and started his own business whose expertise was in water towers that was acquired by Specialty Constructors, at the time, the largest tower installation contractor in the country with over 600 field employees. 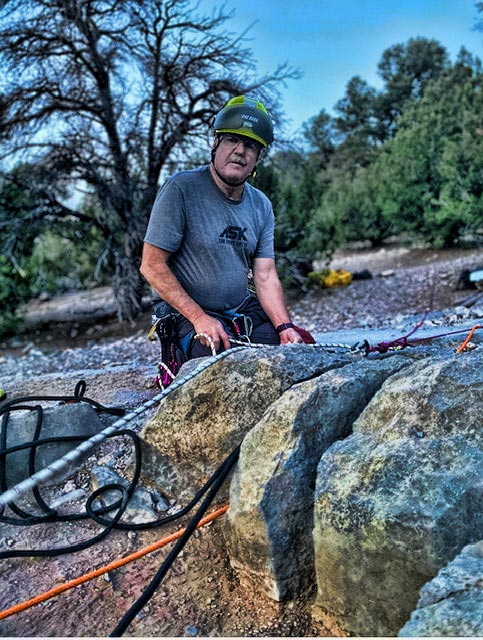 If there’s a profession that requires ropes and harnesses or attachment equipment, Pat Barr is proficient in not only recommending the proper products, but is an expert in their usage

The company through two acquisitions became a subsidiary of American Tower Corp. and Barr later founded ASK Tower Supply which is well known for its rope, safety equipment, and other products.

And he has no reservation about climbing a tower and assisting when there is someone in need of a rescue or training – on his dime.

He handed the reins of ASK over to his son, Kyle, who  has been President of the company since 2013, and has become one of the industry’s leading experts in rope and safety equipment. He recently provided a key presentation on rope selection at NATE 2022 in Las Vegas to a filled room.

Barr’s fervent compassion for safety and client assistance is illustrated when in 2008 a man came in to purchase a piece of pipe from his former fabrication shop.

Barr asked what it was for and Dr. Sam Slishman said it was for his Endorphin Power Company’s climbing wall that was being constructed as an addition to the drug and alcohol clinic’s activities for their transitional housing program.

Climbing? Rehabilitation? Barr jumped in immediately and worked side-by-side with doctors, other volunteers and recovering addicts to complete the wall.

Facebook postings branded the unauthorized climber with numerous labels such as the individual being an idiot, insane, and should be arrested.

Barr had a different observation. “There’s more to the story. I’d like to find out what it is and see if we can give him a better path,” he said.

An inspiring comment that is reflective of another attribute that endeared America to Forrest Gump.