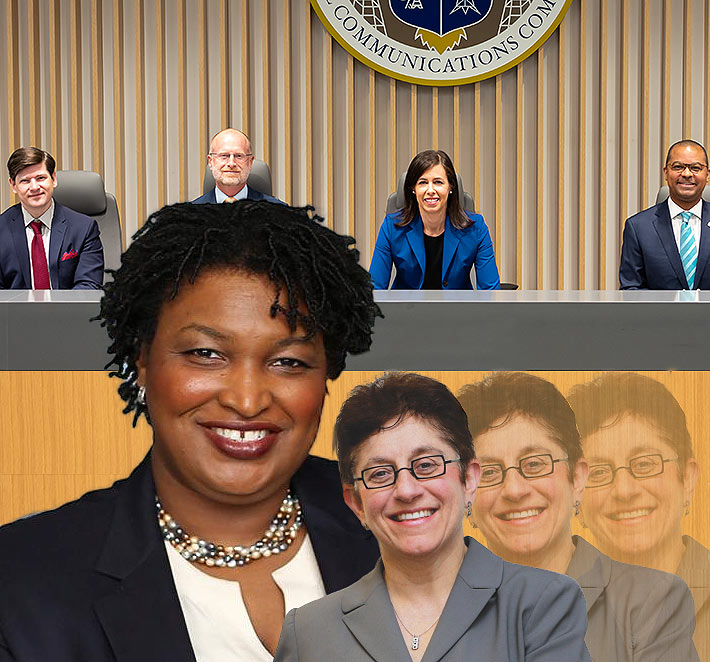 It’s been reported by multiple outlets, through different sources. that Stacey Abrams (left) is vying for Gigi Sohn’s FCC seat that she has been nominated to fill, providing Democrats with a majority of Commissioners. Sohn’s chances could fade away if she is not confirmed this month.

Senate leadership is not expected to line up a confirmation vote for FCC nominee Democrat Gigi Sohn in this year’s lame-duck session, according to statements being made by multiple legislators.

“Bills will likely get the priority” in the Senate’s December calendar, said Sen. Maria Cantwell, D-Wash. Cantwell, who chairs the Senate Commerce Committee and has voiced support for Sohn, said she would continue looking for an opportunity for a confirmation vote.

For many Republicans, Sohn is a divisive nominee. They’ve cited concerns about her social media posts where she published tweets calling FOX News “state-sponsored propaganda.” Sohn said that comment would not make her biased in her role.

President Biden selected Sohn as his FCC nominee in October 2021.

If Sohn isn’t approved before the current session of Congress comes to a close, Biden would need to nominate her for a second time when the new Congress convenes in January, requiring her to be vetted again.

Less polarizing nominees are being considered if Sohn isn’t confirmed. One potential nominee is Stacey Abrams, a Georgia Democrat who lost her second campaign as Georgia Governor last month.

They stated Senate Majority Leader Chuck Schumer’s office, and Abrams didn’t comment. However, a spokesperson for Abrams, Michael Holloman, informed Fox News: “No, Stacey has not applied for or sought out a position on the FCC.”

Holloman’s denial contradicts a report from S&P Global Market Intelligence yesterday that a former FCC official informed them that “Abrams is also being considered for the FCC.”