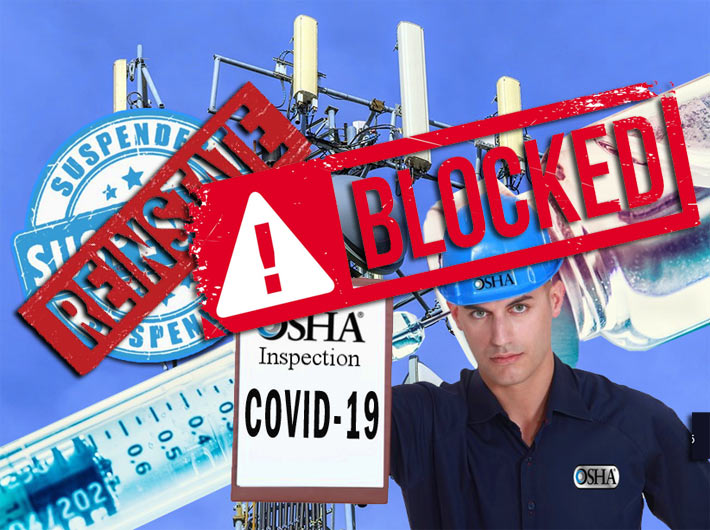 The OSHA Emergency Standard had been enacted, then suspended, then reinstated. Today, the U.S. Supreme Court blocked it.

The Supreme Court today blocked the Biden administration from enforcing a vaccine or testing mandate for large employers, allowing wireless contractors and suppliers with over 100 employees to not adhere to OSHA’s vaccine Emergency Temporary Standard (ETS).

Although there were guidelines that should have been in place following the January 10 deadline, two large contractors had not required the testing or vaccinations since they believed the mandate might be overturned, according to company employees who contacted Wireless Estimator.

The 6 to 3 SCOTUS decision with the liberal justices in dissent, reapplied the temporary injunction that blocked OSHA from enforcing the ETS while parties continue to argue in lower courts over whether the emergency rule is valid.

OSHA’s ETS was only designed to remain in place for six months, then the agency would have had to approve a permanent standard through rulemaking.

The majority opinion said a statute on workplace hazards did not justify a mandate that would have required more than 80 million workers to be vaccinated or tested.

In their dissenting opinion, Justices Stephen Breyer, Sonia Sotomayor and Elena Kagan expressed concern at the court’s desire to frustrate “the federal government’s ability to counter the unparalleled threat that Covid-19 poses to our nation’s workers.”

During last week’s hearing, Sotomayor said that covid cases were surging: “We have 100,000 children, which we’ve never had before, in serious condition and many on ventilators.” Her statement was widely labeled as untrue.

Many wireless contractors have been concerned that if the Supreme Court sided with the administration that they would lose employee at a time when tower technicians are already scarce.

However, contractors can still require vaccinations, regardless of SCOTUS’s decision, but they’ll need to have a plan in place to backfill positions of workers who leave.