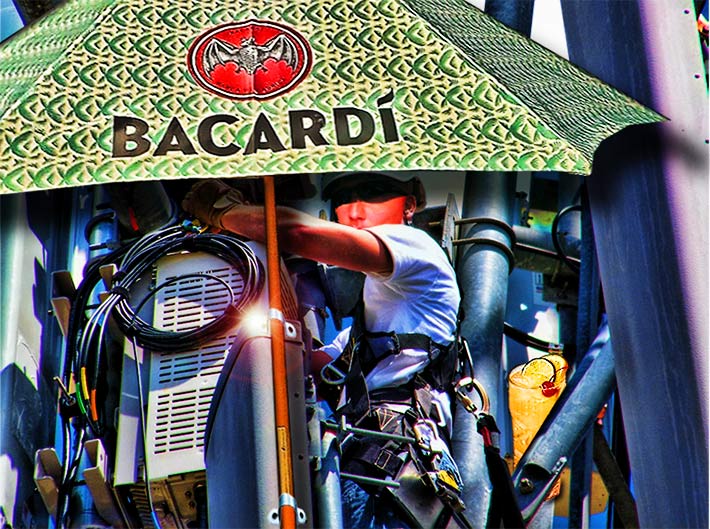 Instead of taking a break in place during high temperatures, a proposed OSHA rule could require tower techs to climb down to a shady area in the compound since towers cannot provide that benefit. It’s in line with the agency’s long-used campaign of “Water. Rest. Shade.“. NATE believes the guidance that the industry follows is adequate and is registering the Association’s concerns. NATE also states that elevated work with a breeze is oftentimes cooler.

OSHA states that it is aware that 70% of heat-related deaths and serious illnesses occur within the first few days of work, and upwards of 50% occur on the first day of work for workers who have not been acclimatized to hazardous heat, and recommends a reduced schedule of strenuous work in outdoor or indoor settings. The agency believes that a comprehensive new rule will address the problem and provide a marked improvement in reported incidents.

NATE: The Communications Infrastructure Contractors Association has some serious concerns about the proposed rulemaking and believes that in its current form, the proposal could create more stress and fatigue on tower climbers.

OSHA, in its Heat Injury and Illness Prevention ANPRM, said a recent analysis of Bureau of Labor Statistics (BLS) data by National Public Radio and Columbia Journalism investigations found that a three year average of heat-related fatalities among U.S. workers has doubled since the early 1990s. 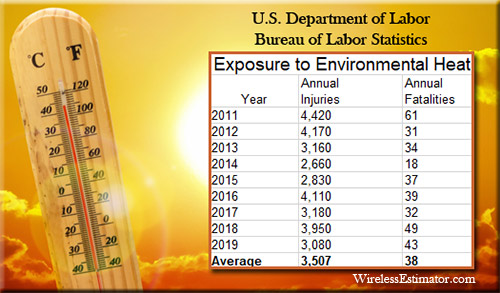 A 9-year average of injuries and fatalities due to high heat in the work environment shows a 12% drop in injury incidents, according to BLS data

In support of the proposed rule, OSHA states that BLS statistics used in the study are likely “vast underestimates,” for a variety of reasons such as “employee reluctance to report”.

Yet, the past 9 years of BLS statistics used in OSHA’s Advance Notice of Proposed Rulemaking (ANPRM), show fatalities were only up 12%, and injuries were down 12%, possibly undermining the investigations’ findings.

The ANPRM is being introduced after Public Citizen petitioned OSHA multiple times to enact an emergency temporary standard. The most current petition has dozens of organizations supporting heat stress regulation as well as citizens, including Dr. David Michaels, who was the head of OSHA during the Obama administration.

Public Citizen also presumes that the BLS records may severely undercount the number of heat-related incidents.

In a letter to Douglas Parker, Assistant Secretary of Labor for OSHA, NATE says it believes that some of the proposed enhanced safety measures, which could include mandatory breaks in shaded area or work-stoppages, will not be feasible for tower crews who are responsible for climbing and fixing communications facilities at height.

“Communications towers do not have sheltered or shaded facilities built onto the towers. Accordingly, mandated work-stoppages could require tower technicians to climb down a tower and into a sheltered area. In these scenarios, safety may actually be compromised because it would require more frequent climbing and contribute to fatigue as well as repetitive stress injuries,” NATE said in its ANPRM filing comments.

“NATE does not believe that a heat standard based on an arbitrary ground temperature properly addresses the conditions encountered by tower technicians and fails to provide appropriate workplace safety benefits to tower crews who work at height. Rather, NATE believes that tower technicians should be vigilant about their personal health history, physical conditions and their ability to acclimate to any new environments. Tower technicians should also follow the heat-related illness guidelines that the Association has developed based on NATE members’ input,” said authors Todd Schlekeway, NATE President & CEO; Jim Goldwater, NATE Legislative Affairs; and Todd Washam, NATE government relations.

NATE wrote that while working at elevation, a tower technician or tower crew could be experiencing cooler temperatures.

Although the FAA states that there is only a 3.5°F temperature offset at 1,000 feet AGL, tower techs can be considerably cooler at any elevation if there is wind aloft that can cool a worker as wind wicks off heat from their body.

In addition, temperatures can vary pretty dramatically between the base of a tower and the top of a structure based upon topography, geography, humidity, relative humidity, and the height of the tower.

A tall tower EHS professional, discussing temperature variances with Wireless Estimator, said, “The temperature on top of a tower could be considerably different than the ground temperature. Speaking from personal experience, I have been on many tall tower sites in shorts and no sleeves on the ground sweating, and the crew is wearing long sleeves and jackets on the towers at height.”

NATE suggests using protective and preventative measures to avoid heat stress. For tower crews who are responsible for climbing, NATE suggests wearing light-colored cotton clothing, climbing slower and instituting more frequent climbing breaks and climbing with partners to ensure climbers can monitor each other for signs of heat stress.

“NATE also recommends drinking 5-7 ounces of water every 15 minutes regardless of whether one feels thirsty. If possible, NATE also recommends that tower technicians complete more strenuous climbs and tower work during cooler times of the day. The most challenging jobs should be spread out over longer times that allow tower crews to set a safe work pace,” the Association said.

To date, no other communications trade group or union has submitted any comments. Some organizations have stated that the comment period to discuss over 100 questions was way too short and asked for an additional 60 days.