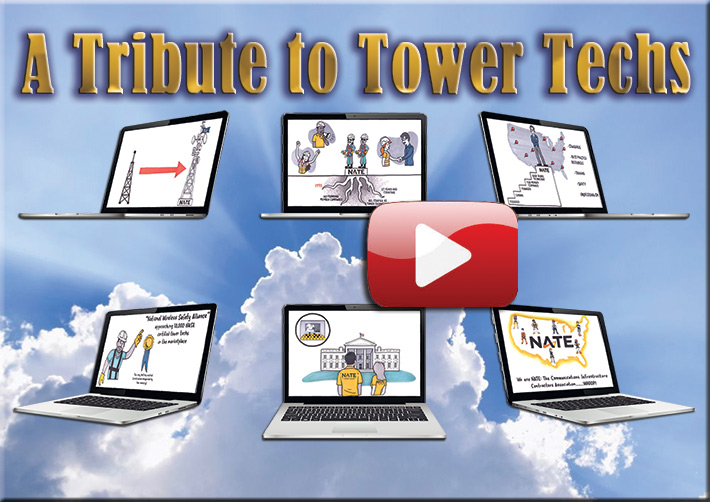 The whiteboard animation video illustrates the important roles tower technicians perform in building and maintaining America’s communications networks. It also details the long history of NATE being the most powerful advocate for tower techs. The video is available here.

Tower technicians are undeniably the indispensable linchpins that keep America’s communications networks operating. Without them, everything falls apart, and NATE: The Communications Infrastructure Contractors Association has released a new, animated whiteboard video that details the truly prominent role they perform in building out and maintaining the country’s wireless networks – from 1G to 5G and beyond.

The tribute to the nation’s technicians began in 1995 when 60 contractors joined NATE as founding members. Although on occasion, social media posts will denigrate company owners as desk jockeys, suits, and other deriding labels, the video emphasizes an important, often ignored consideration. All of the company owners that founded NATE started as tower technicians, and as the narrator states, “We walk the walk because we have climbed the climb.”

THE VIDEO documents NATE’s prominent role in being the flagship organization that is most responsible for the safety, quality, and professionalism of the tower technician workforce.

“This video is a powerful representation of NATE’s longstanding history and tradition of being the industry’s top voice for the tower technician workforce,” said NATE Chairman Jimmy Miller.

“The facts speak for themselves. No other organization has done or will continue to do more for the industry’s workforce than NATE. For 27 years, NATE has been the advocate for our nation’s communications tower technicians and has been by their side every climb and step of the way,” added Miller, who began his career climbing when he founded his company in 1997.

The organization’s press release announcing the “Tower Technicians – NATE is Your Voice” whiteboard doesn’t address recent collective bargaining efforts by the Communications Workers of America (CWA), but the underlying theme is obvious.

In addition to supporting technicians, it provides an excellent overview of the many accomplishments the association has made that clearly contribute to a safer workforce, while heralding that NATE represents member companies that employ over 20,000 tower technicians.

The video details its many achievements that the CWA hasn’t accomplished.

To date, the CWA has approximately 11 tower techs who are currently negotiating a contract with QualTek’s Nevada office.

CWA President Chris Shelton informed Wireless Estimator in May that “By voting for their union, they have taken the next step toward building power to raise wages and benefits and ensure a safer workplace.”

However, although Shelton has publicly stated that small companies are unsafe and need to be unionized, the video emphasizes that the majority of NATE’s 1,100 members are mom and pop companies that adhere to stringent safety protocols.  In addition, many of them helped to develop those procedures and ensuing standards.

Although the CWA has said that it is anticipating starting apprenticeships that will emphasize safety, they do not have any in place at this time.

As identified in the video, NATE has the advantage of 27-years of benefiting from the nation’s leading subject matter experts that are members of the association, many of them who have climbed towers and continue to climb today.