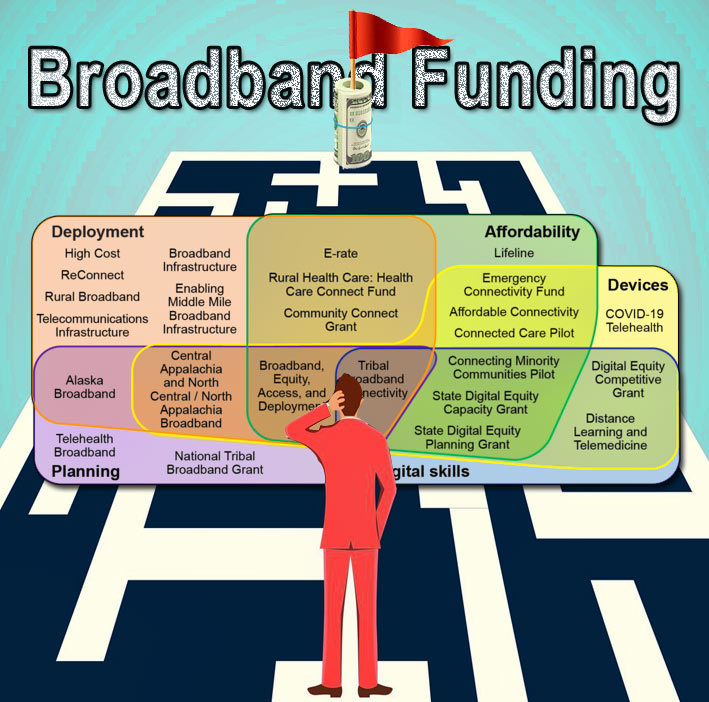 Trying to navigate an overwhelming and fragmented amount of broadband programs, the Government Accountability Office (GAO) is calling for a unified national broadband strategy to manage the 100 different programs administered by 15 agencies.

In a new report, the Government Accountability Office (GAO) is criticizing the “fragmented, overlapping patchwork” of federal efforts to expand broadband internet access throughout America.

The GAO report, titled Broadband National Strategy Needed to Guide Federal Efforts to Reduce Digital Divide, was based on interviews with and questionnaires from federal and nonfederal stakeholders and based on a review of statutes, regulations, and interagency agreements.

The 67-page report found that there are more than 100 programs administered by 15 agencies.

“The U.S. broadband efforts are not guided by a national strategy with clear roles, goals, objectives, and performance measures,” the report says. “A strategy to help better align programs could also include legislative proposals for Congress. Without such a strategy, Federal broadband efforts will not be fully coordinated, and thereby continue to risk overlap and duplication of effort.”

“Programs can also help with planning infrastructure, making service affordable, providing devices, and building digital skills. Despite numerous programs and federal investment $44 billion from 2015 through 2020, millions of Americans still lack broadband, and communities with limited resources may be most affected by fragmentation,” the report said.

GAO researchers found that “programmatic differences, including some set by statute, limit the ability to align programs,” noting that different programs may have different definitions of eligible areas or broadband speeds.

It also recommended that the Executive Office of the President develop and implement a national broadband strategy.

While identifying that the BroadbandUSA Federal Funding Guide created by NTIA is a helpful resource, the GAO says the guide could be improved if NTIA were to seek and incorporate user feedback when updating it.