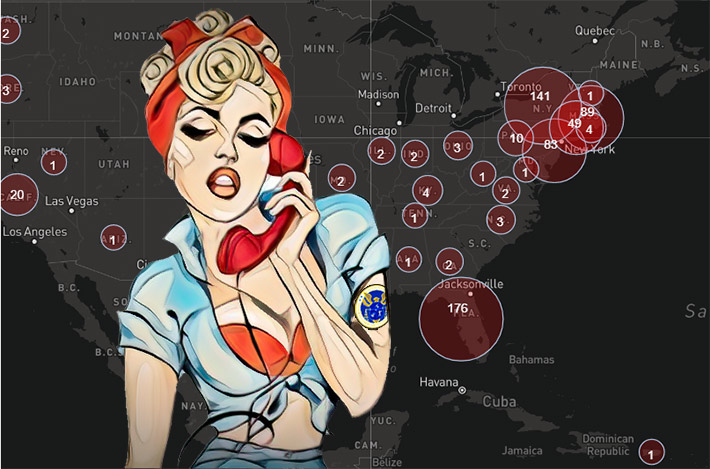 Pirate radio stations continue to operate throughout America. However, it appears that Dial-a-Porn fines have been canceled by the advent of the internet since there has been no record of one issued since 1989.

The FCC’s adjustment of the maximum amount of FCC fines for violations due to inflation will be effective on January 15, 2023, with the agency continuing to be tough on broadcast obscenity.

If the violator is determined by the Commission to have broadcast obscene, indecent, or profane material, the forfeiture penalty can be as high as $479,945 for each violation or each day of a continuing violation, except that the amount assessed for any continuing violation shall not exceed a total of $4,430,255.

It appears that the fines are working, or the agency is afraid to police reported violations since it isn’t convinced it is the arbiter of community standards.

The story was about a former adult film star working for the local rescue squad. The station used footage from an adult Web site, and due to “equipment limitations,” nobody saw the small, erect sexual organ at the extreme margin of the screen.

The fine raised concerns by news media regarding the FCC’s ability to interpret contemporary community standards.

“Our action here sends a clear signal that there are severe consequences for TV stations that air sexually explicit images when children are likely to be watching,” said Travis LeBlanc, then Bureau Chief of the FCC’s Enforcement Bureau.

Congress passed the Anti-Dial-a-Porn Act of 1989 to prohibit the availability of obscene and indecent interstate telephone recordings via toll numbers. However, the Supreme Court struck down part of the law dealing with indecency because the First Amendment protects indecency.

Since the high court ruling, the FCC has not issued a NAL for Dial-a-Porn providers that children could access, the service being a casualty of the internet.

Pirates looting the airwaves can get a hefty $116K fine.

Pirates continue to do what they do best, plunder the airwaves, and their fine has been raised to $115,802 per day for illegal pirate radio broadcasting with a maximum fine of $2,316,034.

Whereas enforcement actions identify that there have been 38 forfeiture orders totaling $1,254,202 fines from December 5, 2012, through July 1, 2020, there were 572 notices of unauthorized operations reviewed by the FCC, directing the party to discontinue operation of their unauthorized radio station immediately.

Although the FCC’s last action occurred on July 1, 2020, according to its website, there have been dozens of additional notices since then. For example, in October, the bureau issued statements to parties in Maryland, Pennsylvania, Florida, and Colorado. In all cases, the named parties were identified as owners of buildings or other properties determined to be a source of illegal radio operations.

They had ten business days to respond by proving they no longer permitted pirate radio broadcasting on their property.

Plus, they are being requested to provide the FCC with the names of the individuals conducting pirate radio operations.

The complete list of FCC fines is available here.