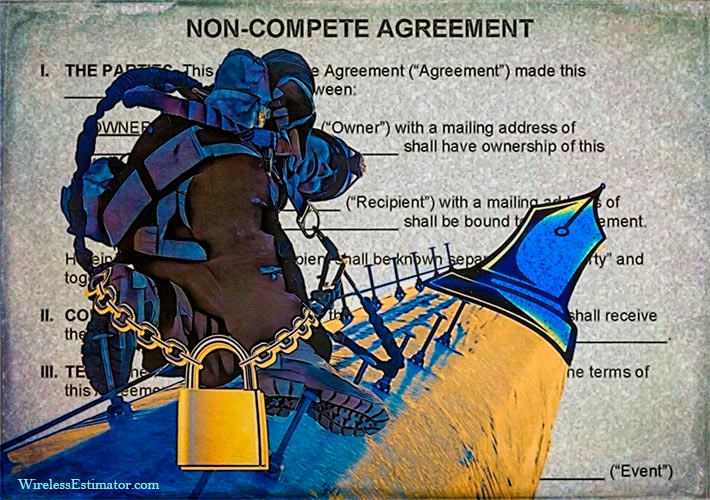 FTC WANTS NON-COMPETES OBSOLETE – The Federal Trade Commission wants non-compete agreements to be a relic of the past. They’ve been regulated in the United States for over 211 years, and the agency wants them abolished. The first case occurred in English law in 1414 when a restraint of trade lawsuit was heard.

The Federal Trade Commission (FTC) issued a Notice of Proposed Rulemaking which would ban non-compete agreements in all employment contracts, except where related to the sale of a business. This exception would only be available where the party restricted by the non-compete clause is an owner, member, or partner holding at least a 25% ownership interest in a business entity.

The rule would apply to any agreement that has the same effect as a non-compete agreement, including broad nondisclosure agreements that would preclude a worker from working in their field at a new company or contract clauses that require an employee to repay a company for training costs if the employee leaves the company.

According to a random sampling by Wireless Estimator of eight contractors with two to 22 crews, five had non-compete clauses in their employment agreements. The FTC states that their investigation found that non-compete clauses bind about one in five American workers.

Three company executives said that although they wanted to enforce the agreement when an employee was hired by a competitor, the attorney’s fees, other costs, and their time wasn’t worth the effort.

One business owner questioned, “Even if you won, the only result is the person couldn’t work for your competitor, and I’m not sure if you could recover attorney’s fees?”

A telecommunications attorney informed Wireless Estimator that the plaintiff could collect legal fees in many cases. Still, he cautioned the company to see if the defendant is judgment proof before filing a complaint.

He added that courts would frequently side with the employee, especially if the plaintiff can’t identify a loss of income or proprietary information, data that is not readily available through other channels.

The FTC’s fact sheet indicates that the clauses stifle new businesses and new ideas and can exploit workers.

The proposed rules do not include exceptions standard on the state level, where a few states regulate non-compete clauses. They also avoid the problem of employers threatening the use of unenforceable non-competes on workers who may not know the clauses are illegal in their state, such as in California.

What are non-compete clauses?

There’s a groundswell of support for abolishing non-competes

Over 300 comments have been submitted addressing the FTC’s non-compete clause rule NPRM in the past two days. Although some submitters are business owners  who are in lockstep with the agency, the majority are workers who support the change.

One submission read: “There is something distinctly un-American about baring individuals from liberty and the pursuit of happiness by limiting economic opportunities to whatever company a person happens to work for. If we are indeed a capitalist society, let’s act like one.

Another summed up their heartfelt comments: “Please, please, free us from this cage. ‘Cages or wings, which do you prefer? Ask the birds’.”

A considerable amount of physicians were in support of the abandonment of non-competes.

“Non-compete agreements are unfair restraints on trade that keep physicians and other healthcare providers from seeking better opportunities for themselves and patients in their communities. I applaud the FTC and its leadership for taking this necessary and overdue step and urge you to include Physicians and other professionals in this rule as we are frequently the target of this unfair practice,” wrote a physician.

Although numerous other physicians presented anecdotal evidence, a study by the American Economic Association found that a 10 percent increase in the enforceability of non-compete agreements causes 4.3 percent higher physician prices and declines in practice sizes and concentration.

Only one comment against the FTC’s action could be found. “This is a killer for small, IP based businesses like mine. Please do NOT do this,” the submitter said.

Although trade associations have not commented on the NPRM, pro-business groups might take another avenue to register their concern – the courts. According to the Wall Street Journal, The U.S. Chamber of Commerce, in a statement, has already said it doesn’t believe the rule is within the FTC’s statutory authority.