Department of Defense officials celebrated this morning’s successful launch of the DoD’s fourth geosynchronous satellite from Cape Canaveral, Fla. that will allow the orbiting satellites and relay ground stations to provide secure communications for mobile military forces in the 300 MHz to 3 GHz frequency range; however, protesters weren’t pleased with the launch and have vowed to continue to picket as they try to remove a pivotal ground station in Italy.

If successful, the move would keep over a quarter of the military’s planned smartphone-type network from functioning. 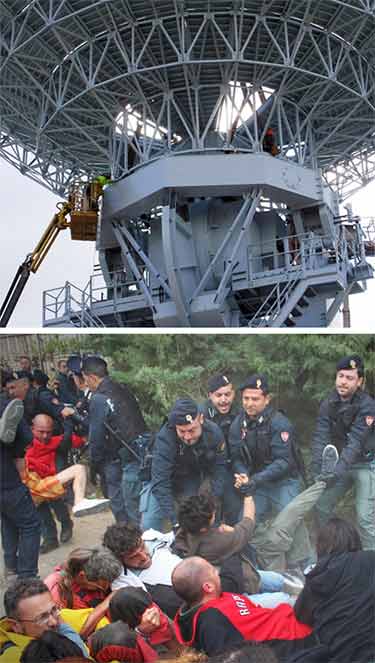 Workers have completed the installation of the three MUOS satellite dishes, but have not tested them. If the U.S. Navy ground station does not become operational, over 25% of the military smartphone-type network will not function. Italians frequently protest the site and are arrested by police.

Four ground stations, each of which serves one of the four active satellites of the MUOS constellation are located in Virginia, Hawaii, Australia, and Italy, but the facility in Niscemi, Italy has raised the ire of its residents, proud of having the highest life expectancy in the European Union, and they’re concerned about the health risks of radio waves and the environmental damage that the earth station could cause.

If the Niscemi site is delayed, or even shut down, approximately 25% of the $7.6 billion MUOS system will not work in Africa from the Indian Ocean in the east to the Atlantic Ocean in the west once it becomes operational in 2016.

The mother of all NIMBYs

The construction of the project was approved by the Ministry of Defense in 2006, followed by the approval of a group of representatives from various local authorities as early as 2007.

Not In My Backyard (NIMBY) protesters halted construction of the ground station’s massive three 60-foot-diameter MUOS satellite dishes in 2013 on the site that has been in operation for approximately 24 years with a farm of tall towers, with a stop-work order handed down by local Sicilian authorities.

An Italian court reversed the stop work order decision after Italy’s National Institute of Health released a report calling the risks of the station “negligible.”

However, although Lockheed Martin, the prime contractor, has completed construction of the $63 million site, a court has again put use of the MUOS site on hold and full testing hasn’t been completed.

But protests still continue in force.

Whereas demonstrators against a cell tower in the US can total less than a dozen sign holders standing on a street corner, one rally in Sicily saw more than 10,000 citizens protest the perceived dangerous RF emissions of the earth station and the dozens of other towers at the Naval Radio Transmitter Facility that porcupine the landscape around the dishes.

Last month, some activists from more than 500 protesters cut holes in the base’s fence and entered the facility, clashing with Italian police and U.S. military. The protesters keep an operations camp facility near the base.

Numerous No MUOS organizations have vowed that they will do whatever is necessary to decommission the ground station.

The US Embassy in Italy has denied rumors that there would be any consideration given to moving the NIscemi earth station after a BBC report said that if Italy ruled against allowing the U.S. to use the facility for MUOS that the U.S. would consider Tunisia, Greece or Spain.

“With reference to some press articles that have recently appeared on the installation of Niscemi, it should be noted that the US government does not intend to move elsewhere
this site satellite communications,” the Embassy said in a statement.

The US Embassy said it would consider putting monitoring equipment around the satellite/tower compound to ensure residents that the systems are safe.

“Given the importance of MUOS’s security of our countries we have confidence that the dispute over the process of granting permits is fixed soon. We hope that the Muos Niscemi is operational in a few months, at the end of the testing and the launch of the fourth satellite,” the Embassy said.

A US Embassy fact sheet states, “MUOS is a telecommunication system that sends communication waves upwards to the four satellites in orbit as part of the networked system.  These waves do not go through anything on the ground – not buildings, not crops, and definitely not through people.”

The fact sheet also identifies that MUOS is not an electronic surveillance system, but incorrectly states the acronym stands for Mobile User Observer System.

The embassy said American and Italian experts will oversee all final testing. Before the emitters are turned on, they said monitoring sensors will be put in place around the antennas to record the existing environment, and “monitors are observed while the emitters are activated to ensure that electromagnetic emissions remain at or below the predicted levels.”

The Italian government and the Sicily regional government requested US assistance in taking the unusual step of establishing a permanent, continuous monitoring system around  Niscemi starting one month before MUOS is operational.

System will have voice, video and mission data 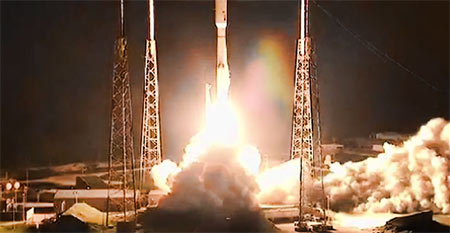 This morning’s successful launch, although celebrated by the DoD, has thousands of Italians concerned about the pressure that might be put in place on their government to approve the permits for the Niscemi site in order to get the MUOS network fully operational next year.Today’s launch of the United Launch Alliance Atlas V rocket is the latest addition to provide simultaneous, crystal-clear voice, video and mission data, over a high-speed Internet Protocol-based system for military purposes.

Sidestepping the inherent problem of not being able to reach 25% of the world if approval of the Nicemi facility is not forthcoming, Iris Bombelyn, vice president of Narrowband Communications at Lockheed Martin, said in a statement, “Delivery of this fourth satellite for the U.S. Navy completes the initial MUOS constellation and provides near-global coverage for the network.”

“For our mobile forces, that means for the first time they will be able to have secure, high-fidelity voice conversations, networked team calls and data exchange, including video, with anyone around the world connected with a MUOS terminal.”

More than 55,000 currently fielded radio terminals can be upgraded to be MUOS-compatible, with many of them requiring just a software upgrade. 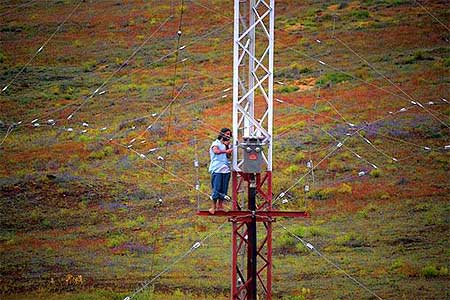 A protester climbs one of the many towers where the US Navy has maintained its Naval Radio Transmitter Facility (NRTF) N8 since 1991, one of its largest telecommunications stations. Not wanting to step on political eggshells, the base recently requested permission from the Italian government to paint and relamp a tower.

The base has been cautious about any work that it does that might cause additional protests. Normal and expected painting and maintenance work on one of their towers, which would largely go unobserved on any military installation, began this summer only after the project had been given permission to proceed by government officials.

Maintenance on the tower was required to ensure continuation of strategic communication support to the naval forces of the US, Italy and the NATO Alliance, the Navy said.  The maintenance work required tower repair, paint preparation and tower painting, and included replacement of incandescent lighting with LED lighting.