In American Tower Corp.’s investors’ conference call this morning, EVP and CFO Tom Bartlett cautioned analysts that their master lease agreement (MLA) with AT&T was not expiring in 2016 when he was questioned by one caller regarding the expiration.

Bartlett said he had seen that statement in some write-ups, but it wasn’t correct. 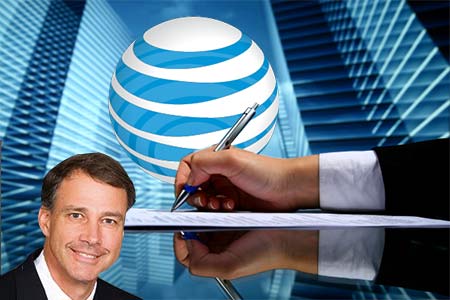 American Tower EVP and CFO Tom Barlett said that reports that AT&T’s master lease agreement would expire in 2016 are incorrect.

In August, SVP and Treasurer Leah Stearns discussed AT&T’s MLA at the Oppenheimer Technology, Internet & Communications Conference and a news report indicated that she had said that “Over the next 12-18 months, as that holistic agreements ends, AT&T will return to leasing on a site-by-site basis with American Tower unless a new holistic agreement is negotiated.”

CEO James Taiclet said during the call that “They (AT&T) were our biggest customer for new business from late 2013 to mid-2014, and they’ve taken a year in between to groom that investment (DirecTV). We do expect AT&T to be competitive over the next few years on the network side of the business.”

Taiclet said that “In the last couple of quarters our largest business partners have been Verizon and T-Mobile.”

He said T-Mobile has been aggressively deploying their 700 MHz A Block spectrum, and “Verizon is pretty stable and steady and their wireless capex is up almost 20% year to date.”

Regarding FirstNet, Taiclet said it was too early to project any lease streams they might obtain from the federal project.

American Tower Corp. executives were well polished with their opening statements this morning since yesterday they had already read them, but their investors’ conference call was cut off after 27 minutes when their conference call provider suffered a “significant outage.”

American Tower’s third-quarter 2015 total revenue increased 19.2% to $1.238 billion, with Adjusted EBITDA up 17% to $779 million. Domestic rental and management saw a 21.8% increase to $808 million, while international business rose 16.5% to $405 million. Net income attributable to common stockholders fell 61.9% to $76 million (18 cents/basic and diluted share), attributed to the one-time Global Tower Partners tax fee of $93 million paid when the GTP REIT was folded into the American Tower REIT, as well as unfavorable foreign exchange rates.

Taiclet said, “Our nearly 14% growth in AFFO per Share in the third quarter was fueled by continuing exponential growth in mobile data demand in both the U.S. and in our international markets. We believe that this growth in demand will go on for many years to come, driven by a combination of lower cost smartphones proliferating around the world, additional spectrum being deployed for mobile data and the competitive imperative for mobile operators to steadily invest in their networks.”