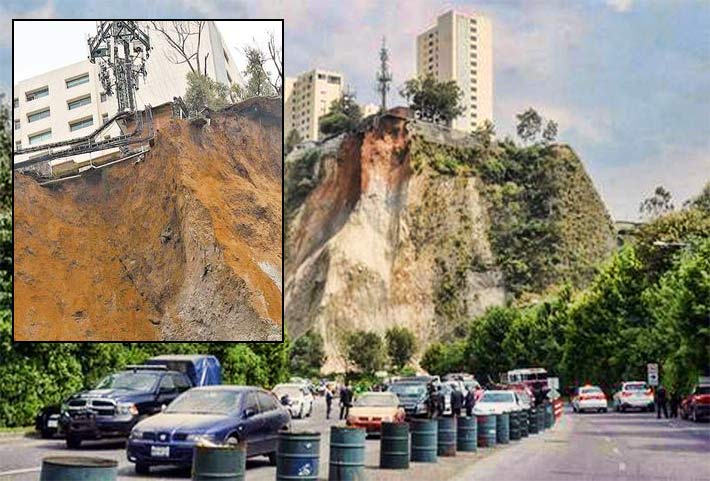 American Tower Corp. CFO Tom Bartlett said during the company’s Q3 analysts’ conference call on Friday that Mexico had 90% wireless penetration, but only had 45% smart phone saturation. He also said that the growth potential was excellent since, “We believe, like Brazil, that the market needs twice the number of towers to support 4G over the long term.”

He noted that the country is a sizable market for American Tower, “and I think it’s really going to contribute nicely to our overall core organic growth over the next several years.”

Unfortunately, one of their structures will not be subsidizing that growth.

At the same time that Bartlett was talking, Mexican authorities were still blocking off the area around an American Tower self-supporting structure in the Santa Fe neighborhood of Mexico City that was getting ready to fall off a 230-foot precipice onto a highway below it.

The borough of Cuajimalpa and other areas in Mexico City had their ground saturated with water, and recent heavy rain caused multiple landslides.

Authorities said American Tower’s structure, did not have the necessary permits, according to Milenio.com. Nor does a group of other buildings nearby.

There is concern that the weight of the tower will bring down more of the hillside and the tower with it.

A building official said it was urgent to remove the tower so that there wouldn’t be any further collapse of the hillside or damage to an adjacent house. The structure serves Nextel Mexico, Iusacell and Movistar, according to news reports.

During the conference call Bartlett said, “The team has done, I think, really well in terms of managing the portfolio that we have had down there. It’s grown significantly. We’re building towers for our customers in the marketplace. It’s our second-largest Latin American market, probably in the $300 million, $350 million range.”

It is not known whether the Santa Fe tower was built by American Tower or was an acquisition.

AT&T is American Tower’s biggest customer in Mexico, providing over half of their revenue base in the country, CEO Jim Taiclet said during the conference call.

Telfonica represents about 20% of their revenue stream there.