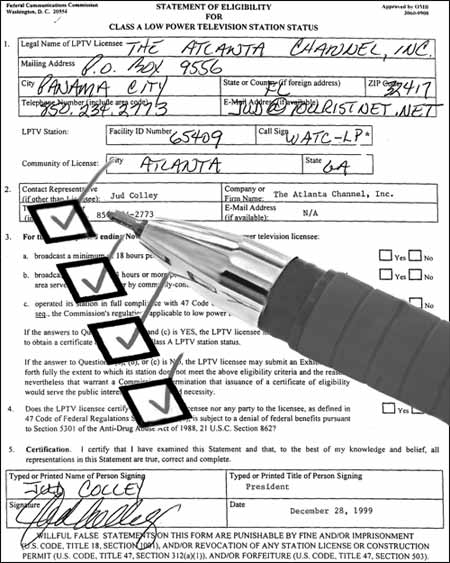 Had four check boxes been completed the broadcaster would have most likely received its Class A License.

The malpractice lawsuit being brought before a federal court in Washington, D.C. says the botched incomplete filing for a Class A License cost the companies to lose $20 million.

Filed Monday, the complaint alleges that attorney Henry A. Solomon of Haley Bader & Potts, acquired by Garvey Schubert Barer in 2000, had represented ACI in the acquisition of WTHC, a low power TV station (LPTV) in Atlanta, Ga.

In 1999, Congress enacted the Community Broadcasters Protection Act of 1999 (CBPA), and directed the FCC to grant Class A status to any qualifying LPTV station, but certification for eligibility would have to be filed before January 28, 2000.

The complaint says that Solomon submitted the one page eligibility statement signed by ACI’s president, Jud Colley, but it did not have four boxes checked off when it was submitted on Dec. 29, 1999.

Solomon filed a petition for reconsideration on June 22, 2000, with an amended application with the required checkmarks, but on Nov. 20, 2000 the Mass Media Bureau of the FCC denied it because “none of the certification questions had been completed” in the first submission.

Solomon then filed an application for review by the full Commission and was informed on Nov. 8, 2012 that the FCC’s staff was correct in their denial.

On Dec. 7, 2012, an attorney with the Garvey Schubert Barer firm filed a petition for reconsideration of the FCC’s action of Nov. 8, 2012

On Oct. 7, 2014, the FCC denied the petition, stating, “The Atlanta Channel’s initial Statement of Eligibility lacked any information supporting eligibility, and its corrected statement was untimely.”

On Sept. 23, 2015, the Court of Appeals for the District of Columbia affirmed the FCC’s denial of a Class A License for the WTHC-LP License.

In addition to requesting a minimum of $20 million for the diminished value of the WTHC-LP license which is not a Class A License, ACI is seeking attorneys’ fees and interest.

Earlier this month, Curtis Jackson, also known as 50 Cent, filed a lawsuit accusing Garvey Schubert Barer, who represented him in licensing neotiations and arbitration disputes with a headphones maker in which the bankrupt entertainer had invested.

In his suit, 50 cent accused the firm of failing to “employ the requisite knowledge and skill necessary to confront the circumstances of the case.”