John Legere, the oftentimes eccentric and outspoken CEO of T-Mobile US, in a studio setting that mirrored an Imus in the Morning production complete with caustic remarks by the un-carrier chief, provided an entertaining as well as illuminating third-quarter conference call where Legere said today, “I do expect some dark horses to show up,” such as Google and Charter Communications to bid in next year’s incentive auction of 600 MH broadcast TV spectrum. 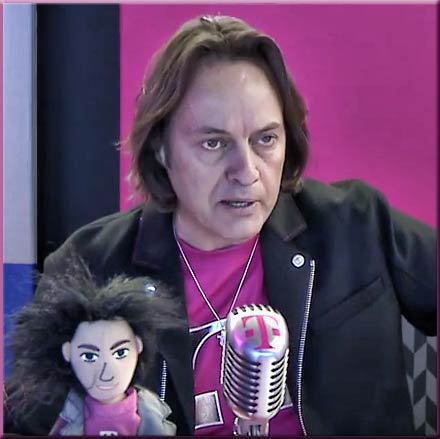 John Legere, CEO of T-Mobile, said he wants to “inflict pain on the duopoly”.

“Weve had 10 quarters in a row with over one million net new customers, five with over a million branded postpaid customers and a total of 2.3 million new customers this quarter alone,” said Legere in a Q3 press statement. “Our momentum is strong and our incredible customer growth is translating directly into solid financial growth which makes it crystal clear that putting customers first is just good business.”

But his live presentation was less formal, as he knocked Tier 1 carriers who he contends are “crazy” thinking that they are the ones that will be controlling the wireless industry.

The earnings call video can be seen here.

Bombastic CEO enjoys inflicting pain
During the call with analysts and media, Legere said he wants T-Mobile to continue to “inflict pain on the duopoly,” AT&T and Verizon Wireless, and plugged his company’s ability to take customers away from its rivals, especially AT&T.

He also said that the carrier’s 4G LTE network now covers 300 million people across the U.S., and by the end of the year it will have added 1 million square miles to its coverage area.

Legere used the conference call to put out a teaser for Uncarrier X, the tenth announcement in their series, scheduled for Nov. 10 in Los Angeles.

With his business couture of a t-shirt and cowboy hat, CFO Braxton Carter said the incentive auction will be “transformational” for T-Mobile by giving it access to more low-band spectrum with better propagation characteristics, which he said will let T-Mobile expand its coverage footprint and provide better service in buildings.