The Kentucky Fatality Assessment and Control Evaluation (KY FACE) has released a comprehensive examination of an industry fatality that happened last year when a 28-year-old Indiana worker died in Cynthia, after he was decapitated by a cable when a 5/8” shackle failed while his crew was lifting a 1800-pound boom with antennas on it. 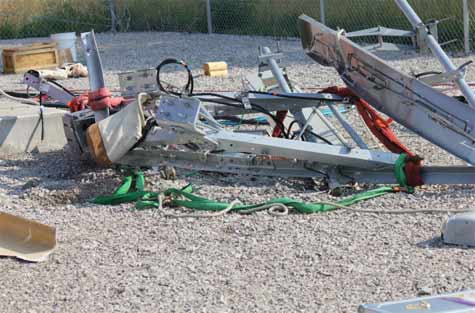 Although the employer said a shackle was being used in combination with the lifting system, the report said that “there was evidence gathered at the scene to suggest that a carabiner was used in place of the shackle”.

One of the key findings was that two workers on site were identified as being certified competent riggers through Comtrain, but could not provide any documentation. The KY FACE report said that it was unlikely that they had rigger training from Comtrain since the company didn’t add certified rigging classes until February 2015.

In addition, although the employer said a shackle was being used in combination with the hoisting system, the report said that “there was evidence gathered at the scene to suggest that a carabiner was used in place of the shackle”.

Search groups including KY OSHA, the company’s insurance carrier, and the sheriff’s department searched for the broken shackle for four days with metal detectors, but were unable to locate it.

However, a shattered carabiner was recovered at the site the day of the incident, indicating that it could have been used on the winch in place of the shackle. This discovery, the KYFACE report said, could explain why the shackle was not recovered.

The report, available here, recommended that employers should ensure that a competent rigger is on site to perform a site hazard assessment before work is performed, as detailed in ANSI/TIA standard 1019-A.

That requirement was also emphasized in a video presentation released last week that was moderated by Jim Maddux, Director of Construction Safety for OSHA.

The deceased’s employer, Fortune Wireless, was cited for three serious workplace violations totaling $14,700 on October 3, 2014, but OSHA abated $9,800 in fines after Fortune Wireless, Inc. contested the citations on  October 27, 2014. The company paid $4,900 for a general duty clause violation and OSHA closed the investigation on May 21, 2015.