Although Google is currently developing wireless service plans that will prohibit tower technicians from climbing to maintain the transceivers – because they’ll be at an elevation between 23,000 and 65,000 feet in the stratosphere – this week’s announcement that the company intends to offer MVNO wireless connectivity to customers in the U.S. will also exclude techs from working on Google-owned terrestrial structures. There will be none available. 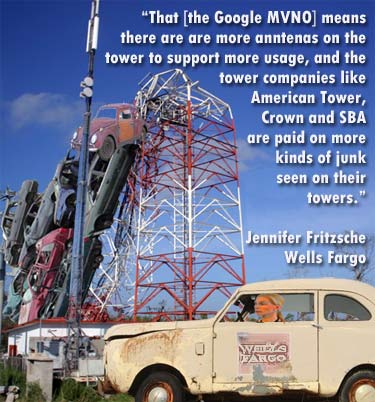 Although one analyst said that Google’s MVNO would require new equipment on existing cell towers, Marc Ganzi, CEO of communications infrastructure investor Digital Bridge Holdings, LLC, said that may not be true.

Google’s entry into the wireless industry will be as a virtual network operator (MVNO), which buys wireless space from the big four carriers, then resells it to customers.

Following Google product chief Sundar Pichai’s announcement earlier this week, a number of  industry articles suggested that Google’s market entry will provide a considerable upside for tower owners and the construction industry, but it appears to be a “small-scale” experiment, as Pichai promised – especially since their goal to let users switch between cellular service and local wi-fi networks more easily will only work on one phone, the Google Nexus 6, according to The Wall Street Journal.

‘Junk’ on towers may be a stretch
Before Pichai’s announcement reached the back of the cavernous Mobile World Congress 2015 hall in Barcelona, Spain, analysts were scrambling to assess the impact upon the industry.

Wells Fargo telecom analyst Jennifer Fritzsche jumped to the airwaves stating that if a new competitor comes in: “That means there are more antennas on the tower to support more usage and the tower companies like American Tower, Crown, SBA are paid on more kind of ‘ junk’ seen on the towers themselves.”

Ganzi doesn’t necessarily see the need for more equipment on existing sites, but he does perceive that a new MVNO capable of ramping up, such as cash-rich Google, will directly and indirectly contribute to more CAPEX being spent for new sites and densification of the networks to manage the potential for network congestion on Google’s wholesale partners.

“Historically, MVNO consumer plans have unlimited usage and in turn that hurts the primary carrier’s network, requiring them to re-invest in it as capacity becomes constrained. This inevitably means cell splitting in congested areas and adding new collocations or greenfield tower sites,” said Ganzi.

Google said it will provide additional details on its MVNO plans in the coming months.

The sky is not limiting Google
Google is also working on building wireless connectivity in sections of the world where there’s no existing infrastructure. Project Loon, which employs balloons that lift transceivers in the air to provide coverage on the ground in remote and rural areas are currently being successfully tested.

Although the concept isn’t new since other companies have had live tests to provide balloon connectivity in rural areas of America, Google appears to have flattened out the numerous kinks for making it a near-term reality.

After two years, the balloons can now keep cellular radios in the air for as long as 200 days, Pichai said.

From its early days of R&D when a styrofoam beer cooler was used to house Loon’s high-tech payload, to today’s sophisticated systems that have floating cell towers in the sky, crisscrossing the globe, by riding global wind currents like rivers, climbing and sinking to find the right flow. 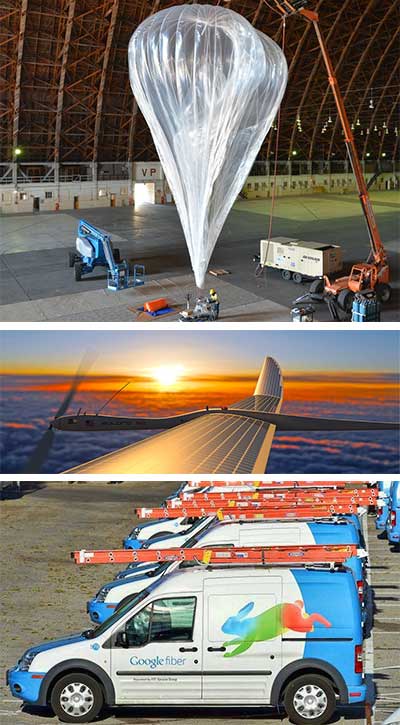 Google’s cell tower in the sky, Project Loon, is proving that it can be a viable option in remote areas of the world. The company is getting ready to launch Project Titan, a drone internet network. Although Google inferred that it was not going into a large scale plan for its MVNO, the company said the same thing when they launched their first fiber-optic business which is now being expanded to 18 more cities.

For an intriguing inside look at the project, see The Verge’s The sky is almost open for business.

Pichai also touched upon Project Titan, where a lightweight drone aircraft is outfitted with transmitters. He said that the drones could be deployed quickly to an area in need of extra capacity, like a disaster zone.

The high stratosphere drones can fly for long periods. They act as an alternative to a satellite by beaming internet onto a target area – much like satellite TV companies such as Sky do from geostationary satellites.

Pchai said that they will be flying and testing the drones this year.

Last year Google bought Titan Aerospace, a drone manufacturer that was also being courted by Facebook.

Whereas the drones will stay in one area, according to Google, the balloons provide an almost opposite  network design used by cell towers. A stationary individual on the ground using their LTE phone will be handed off from balloon to balloon as it moves overhead so that the call is not dropped.

The company, which got its start on the internet, and is now providing it, envisions a mesh network stitched together by drones and balloons.

Getting back down to earth with fiber
A Google experiment five years ago, building a fiber-optic gigabit internet in Kansas City, with speeds up to 100 times faster than today’s basic broadband, is transforming how that city is able to use technology to improve the life of their citizens

Although at that time, like the MVNO initiative, it too was described as an unobtrusive program. But based upon its success, Google has announced that it is going to provide the same fiber network in 18 more U.S. cities.

An early access program is offering companies the service for just $100 per month, and in the words of Provo, Utah Mayor John Curtis, small businesses can “kiss loading bars goodbye.”

“We want to break down the barriers on how connectivity works,” said Pichai in Barcelona, not mentioning that for every Google initiative that the company experiments or invests in, it must have a strong business model ensuring financial success.