Crown Castle International Corp. announced today that it plans to explore the potential sale of its Australian subsidiary (CCAL). 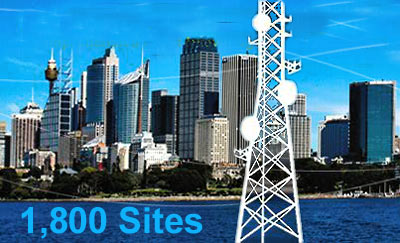 “In light of recent unsolicited offers we have received for our interest in CCAL, we have determined that fully exploring the options available to us will ensure the best long-term results for our shareholders,” stated W. Ben Moreland, Crown Castle’s President and Chief Executive Officer.

“Similar to our US business, CCAL has developed into a leading wireless infrastructure provider in the attractive Australian market with a unique portfolio of assets and platform for future growth and expansion.”

With approximately 1,800 towers, CCAL is the largest independent tower operator in Australia. Crown Castle owns 77.6% of CCAL and has an intercompany loan of approximately A$306 million due from CCAL as of Dec. 31, 2014.

In 1994, Houston-based Castle Tower Corp began with 133 towers in Southeast Texas. In 1997 it merged with Pittsburg-based Crown Communications and they changed their name to Crown Castle International since they also owned or had access to at the time 1,300 towers in the United Kingdom.

The company entered the Australian market in 2000, but if a deal for their down under portfolio is made they’ll be back to their roots in the US, but this time with 40,000 towers, about even with their key competitor, American Tower Corporation.

Moreland solicited offers in January analysts call
Although Crown’s press release stated that they had received “unsolicited offers,” that may have been a slight stretch since Moreland had indicated last month that Crown was not attached to the Australian towers during an earnings call with analysts, partly because CCAL would have to pay higher taxes in the future.

“To the extent there was someone who frankly wanted to own it for a value that compelled us to sell it, we would take a look at it,” said Moreland, putting out the for sale sign, according to a Seeking Alpha transcript.

“That business [CCAL] will actually start to lose its tax shelter inherent in the depreciation over time,” he said. “So we will start paying more and more taxes over time which causes us to think about it.”