According to a comprehensive study released today by WirelessEstimator.com identifying how many wireless technicians routinely work on elevated structures in the course of their employment, the number of tower climbers has dramatically increased to over 29,000 workers, almost triple from the last available analysis undertaken in 2006 by Wireless Estimator which put the total of tower technicians at approximately 9,800. 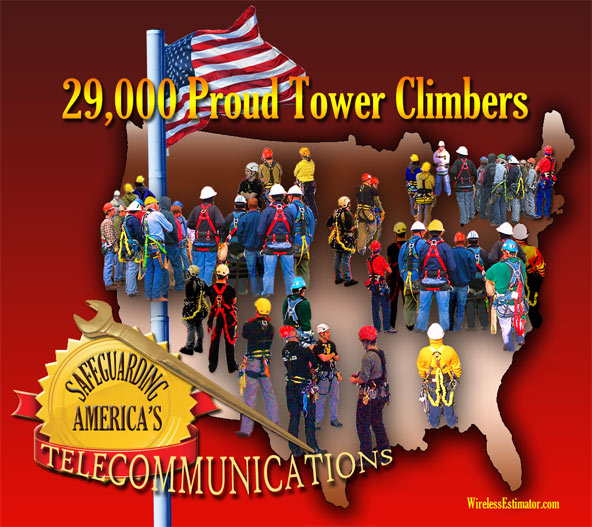 The significant increase comes with a slightly positive upshot for the industry’s safety ranking compared to other high risk professions. Whereas tower construction is often tagged by the media as the most dangerous job in America – and it clearly had been in 2006 – based upon the number of deaths per 100,000 workers used by the Bureau of Labor Statistics for

analysis, the wireless infrastructure industry, reaching an unacceptable 14 deaths in 2013, was the fourth deadliest profession under aircraft pilots and flight engineers.

Here’s how the 29,000 tower climber count was compiled:

In a multi-question survey that was taken between June 2013 and August of 2014, a total of 272 company managers provided the number of crews and tower technicians that they employed that were required to worked on elevated structures.

Using data from the representative number of small, medium and large contractors, it was identifed that the average for each company w 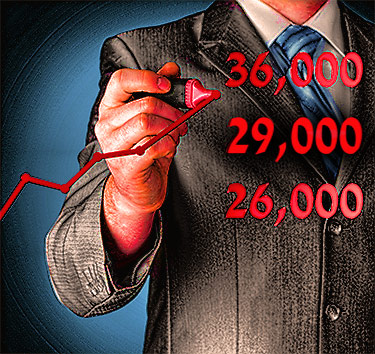 Two statistical and research analysts that assisted in reviewing the study said the methodology provided an acceptable reference point for an industry that previously relied upon unsupported estimates.

There are, however, some qualifying factors that could modify that total.

When the survey was taken, hiring was at an all-time high to complete 4G build-outs, according to Wireless Estimator’s employment trend lines. In May of 2014, AT&T’s capex spending freeze and a less feverish pitch by other carriers to complete their builds, began a marked decline in hiring, although many companies are still short qualified workers.

Some climbers not included in total
Conversely, the 1,145 contractor-count does not include companies that 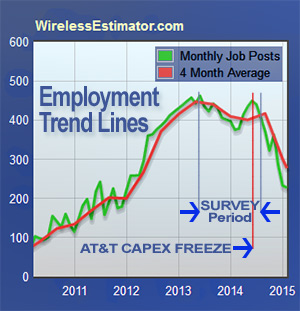 do not have an internet presence, a requirement to maintain accurate data for the Blue Book.

As a point of reference, 24.8% of the National Association of Tower Erectors contracting companies do not have a web site, a percentage below the national average of small businesses.

In addition, there are a number of climbers who work as 1099 subcontractors with loosely knit crews that are not counted in Wireless Estimator’s research.

Also, an unknown quantity of municipal and utility company tower climbers were not included in the 29,000 estimate.

An individual did not have to work full time on elevated structures, such as a crew foreman to be identified as a tower climber if they were required to be safety trained to climb, and their job description required them to perform those duties as necessary.

National Association of Tower Erectors Executive Director Todd Schlekeway stated that one of the more frequent questions he has fielded over the years has been the total of tower climbers in the nation, and had encouraged his organization and the Wireless Industry Safety Task Force’s members to participate in Wireless Estimator’s 16-month survey.

Companies were contacted to verify the accuracy of their data if it appeared to be in contrast to known averages or industry information.Company surveys and Wireless Estimator research provided additional information below that will be helpful to the industry at large for analysis. 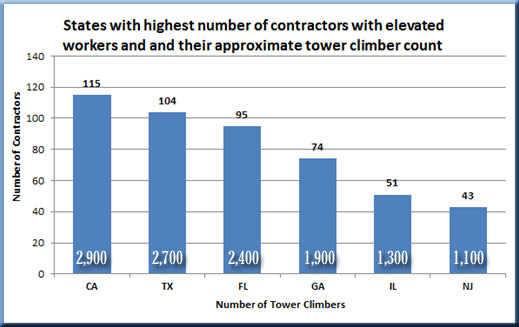 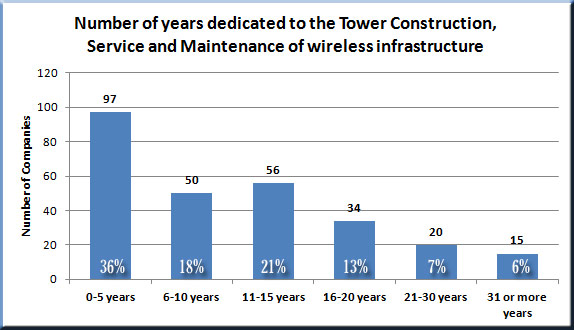 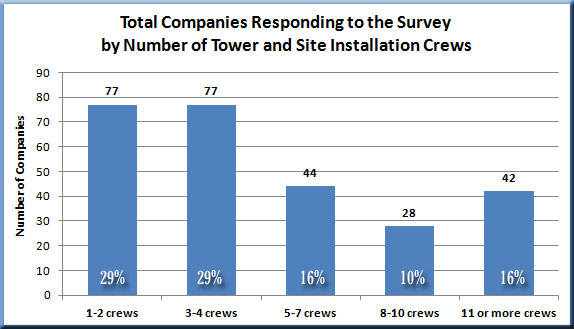 53% of contractors provide safety training immediately
In reference to the following question: “How long after you hire a tower climber do you put them through tower safety and rescue training, even if they have been in the industry for a while and were certified with their previous employer?”, 53% of the respondents identified that they were immediately trained. Within a month, 80% of new hires had been trained. 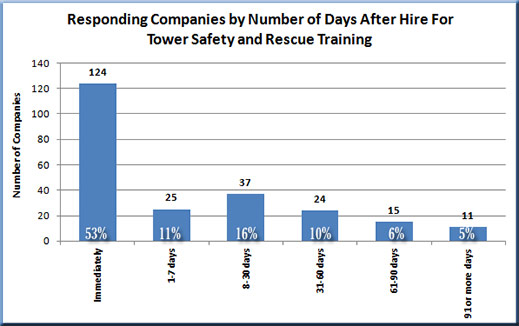 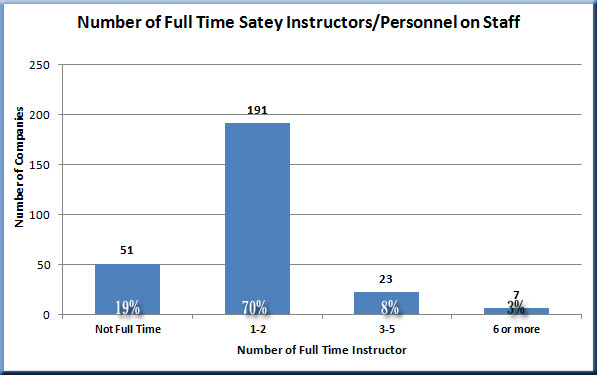 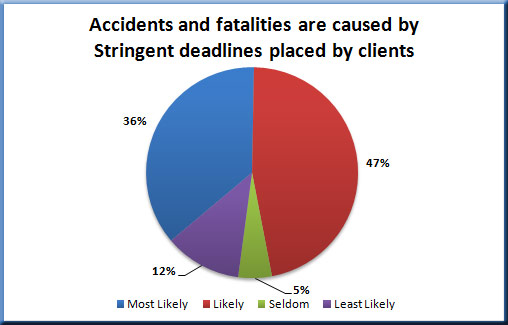 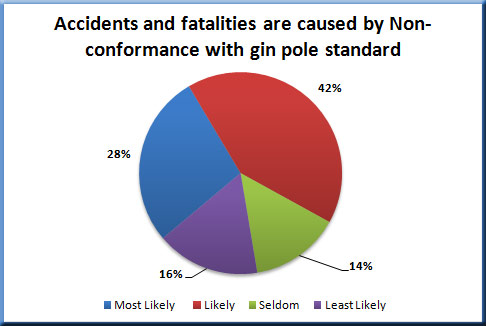 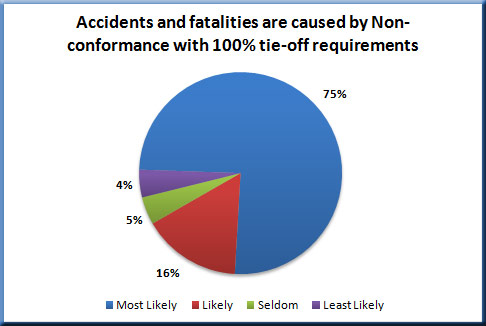 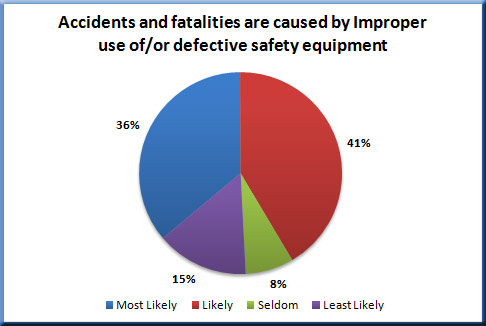 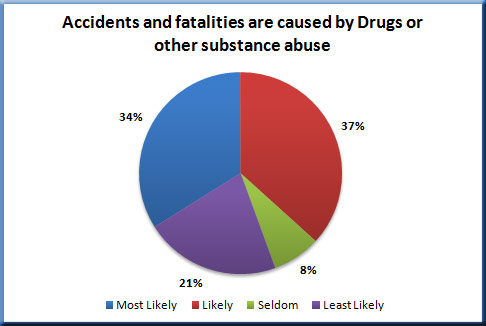 31% believe lack of crane or manbasket availability causes accidents/fatalities
The majority of respondents felt that by not having a manbasket or crane on site that it was seldom or least likely attributable to causing accidents or fatalities. 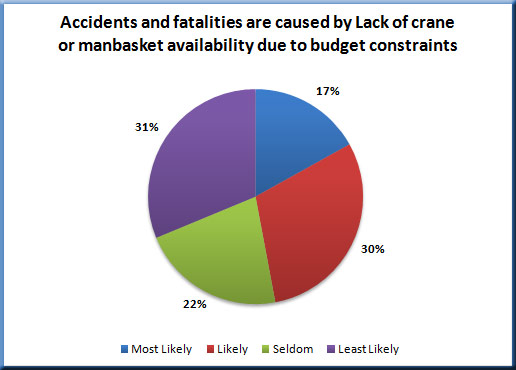 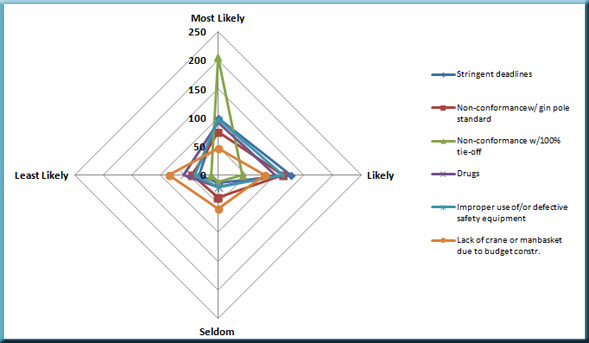 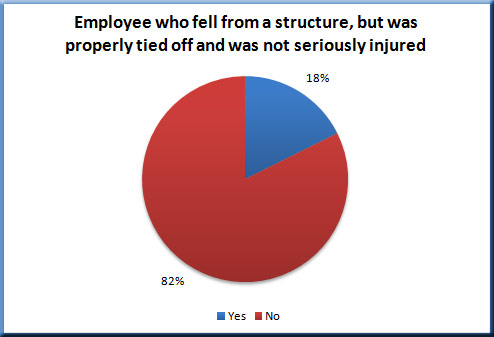