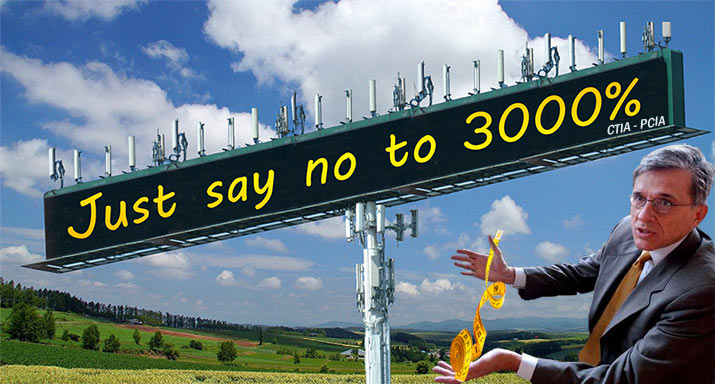 The FCC adopted a report and order on October 17, 2014 that accelerated broadband deployment by improving wireless facilities siting policies. Their actions were intended to encourage deployments on existing towers and structures—rather than entirely new towers—in recognition that collocations almost always result in less impact or no impact at all. A primary focus was to identify what additions to a tower would be allowed without it providing a “significant” change of the footprint of the existing structure. (See below for what those allowable changes are.) A handful of cities didn’t like losing what they thought was state or home rule and filed suit on April 24, 2015 to overturn the report and order, citing ambiguous language regarding “significant”. PCIA and CTIA filed a lawsuit arguing against the municipalities’ charges.

The April  filing alleges that the FCC overstepped its authority with its report and order by defining what constitutes a “substantial change” in “physical dimensions” to promote collocation deployment, and without proper regard for the ordinary meaning of those terms.

It also questions whether the order violates the Tenth Amendment to the Constitution of the United States.

The lawsuit points out that “Where towers and base stations vary dramatically in size and design, and where the location may affect a change’s impact significantly, the sort of blunt, absolute standard adopted in the rules is not a reasonable standard, nor one that can be adopted consistent with the plain meaning of the law.”

The petitioners questioned how the FCC decided what was “substantial,” stating that the Commission repeatedly notes the benefits of small cells because of their small size, but then authorizes an increase that would multiply the volume of some small cells almost 3000 times without considering whether such an increase would be “substantial.”

“The absence of that explanation, and of any rational basis for the lines drawn, is fatal,” the complaint claims.

But CTIA and PCIA state that the charge is through the plaintiff’s lack of knowledge about the order, or it’s a red herring.

“In a parade of imagined horribles, Petitioners assert that facilities modifications could swell ‘3000 times’ and extend to ‘unlimited depths’. To reach these absurd conclusions, Petitioners misread the Infrastructure Order.”

Yesterday’s suit also states that the plaintiffs’ claim that the six, 10, and 20 foot thresholds contemplated in various instances can generate a 3000% increase in size is based upon using a support structure for a deck of cards-sized small cell.

The CTIA/PCIA lawsuit says, “In any event, even if Petitioners’ worry were not put to rest by the plain text of the rules, it defies reality: expanding structures to ‘3000 times’ original size is in most cases an engineering impossibility.”

The associations contend that the infrastructure order does not violate the Tenth Amendment.

CTIA and PCIA wrote in their filing that Section 6409(a) and the infrastructure order are “plainly constitutional.”

“Section 6409(a) offers State and local governments a constitutionally valid choice between ‘regulating [wireless facilities modifications] according to federal standards or having state law pre-empted by federal regulation,’ ” they wrote in their lawsuit.

The order “supports that choice because it gives effect to Section 6409(a) in a manner that does not require action on the part of State or local governments. State or local officials are not ‘required to approve or prohibit anything.’ ”

Under Section I.C of the Nationwide Collocation Agreement, a “substantial increase in the size of the tower” occurs if:

1) The mounting of the proposed antenna on the tower would increase the existing height of the tower by more than 10%, or by the height of one additional antenna array with separation from the nearest existing antenna not to exceed twenty feet, whichever is greater, except that the mounting of the proposed antenna may exceed the size limits set forth in this paragraph if necessary to avoid interference with existing antennas; or

2) The mounting of the proposed antenna would involve the installation of more than the standard number of new equipment cabinets for the technology involved, not to exceed four, or more than one new equipment shelter; or

3) The mounting of the proposed antenna would involve adding an appurtenance to the body of the tower that would protrude from the edge of the tower more than twenty feet, or more than the width of the tower structure at the level of the appurtenance, whichever is greater, except that the mounting of the proposed antenna may exceed the size limits set forth in this paragraph if necessary to shelter the antenna from inclement weather or to connect the antenna to the tower via cable; or

4) The mounting of the proposed antenna would involve excavation outside the current tower site, defined as the current boundaries of the leased or owned property surrounding the tower and any access or utility easements currently related to the site.

What is a wireless tower or base station?
A “tower” is defined in the Nationwide Collocation Agreement as “any structure built for the sole or primary purpose of supporting FCC-licensed antennas and their associated facilities.” The Commission has described a “base station” as consisting of “radio transceivers, antennas, coaxial cable, a regular and backup power supply, and other associated electronics.” Section 6409(a) applies to the collocation, removal, or replacement of equipment on a wireless tower or base station.

In this context, the FCC believes it is reasonable to interpret a “base station” to include a structure that currently supports or houses an antenna, transceiver, or other associated equipment that constitutes part of a base station. They also believe a “base station” encompasses such equipment in any technological configuration, including distributed antenna systems and small cells.