The National Association of Tower Erectors today honored Don Doty, Vice President of Operations at Velocitel, Inc. in Cedar Hill, Tex. and Kevin Reski, President of Great Plains Towers in West Fargo, N.D., during the Founding Member Luncheon at NATE UNITE 2015 in Lake Buena Vista, Fla. The conference, which began yesterday, has topped attendance records for the premiere event for the wireless infrastructure construction community, according to the show’s planners with almost 1,700 attendees. 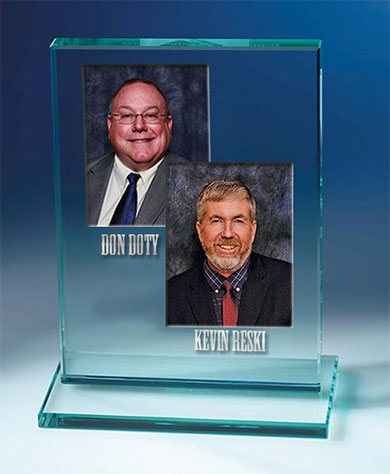 Long-time NATE members and safety advocates Don Doty and Kevin Reski were honored today during the Association’s annual convention for their dedication to ensuring that workers return home each evening safely.

Doty was honored as the recipient of the Bill Carlson Lifetime Service Award. This prestigious honor recognizes an individual who has made a significant and long-term contribution to the success of the NATE mission and has served the Association continually for a minimum of 15 years.

He began his career working on broadcast towers in 1974 and has been working in the industry for over 40 years. Doty has been an active member of NATE since it was founded in 1995 and has served the Association in leadership roles that include Chairman, Vice Chairman and Executive Board Member. Doty is also an active member of NATE’s Legislative & Regulatory Committee, OSHA Relations Committee, A10.48 Committee and Wireless Industry Safety Task Force.

“Mr. Doty is a tireless advocate for developing standards and promoting a culture of safety in the tower industry,” said NATE Executive Director Todd Schlekeway. “Don is one of NATE’s leading subject matter experts who selflessly contributes his time and talents to advance the Association’s mission of safety, standards and education.”

Kevin Reski was honored as the recipient of the Distinguished Service Award. This prestigious award recognizes a past or present standing committee member who has demonstrated direct and individual contributions to the mission of NATE and whose performance has proven so exceptional that it profoundly affects the success of the Association.

Reski joined his family’s business in 1974 and was instrumental in positioning the company for growth as a prominent tower erection and maintenance company. In 1990, Reski changed the name of the company to Great Plains Towers and his leadership has enabled the company to provide services in projects throughout the upper Midwest and as far away as Argentina and Antarctica.

Reski is a long-time NATE member having served two terms on the Association’s Board of Directors and various roles on NATE standing committees, including his current service on the Member Services Committee. Kevin is also well known in industry circles for being featured on the popular Dirty Jobs television show with Mike Rowe.

“The word loyalty comes to mind when talking about Kevin Reski,” stated NATE Member Services Committee Chairwoman Pat Miller. “Kevin is a passionate supporter of NATE and is relentless in promoting the Association to everyone he crosses paths with in the industry,” shared Miller.

The Bill Carlson Lifetime Service and Distinguished Service awards were made possible due to the contributions made by the NATE Member Services Committee and the awards are an annual fixture at the NATE UNITE event. For additional information on NATE, visit www.natehome.com.