Although it might be eight to 12 months or more before tower techs or foremen will be able to proudly show their training and skill-set certification card, an announcement today by the leadership of the Wireless Industry Safety Task Force identified that certification in the future will be a reality and will enhance tower safety, reduce workplace risk, improve quality, encourage training and recognize the skilled professionals who work on towers. 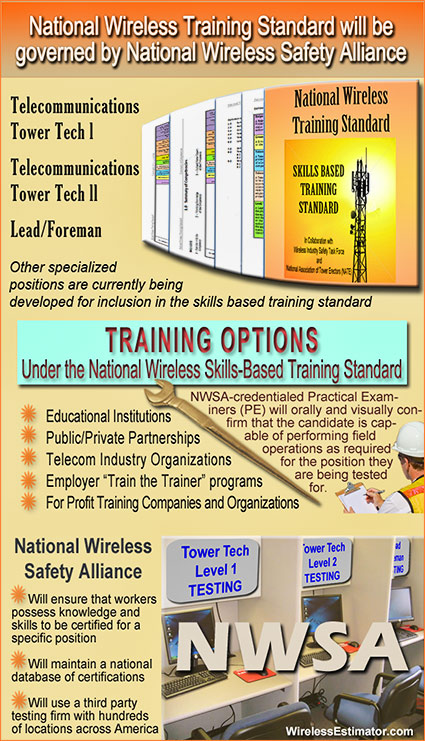 According to National Association of Tower Erectors Executive Director Todd Schlekeway at NATE UNITE 2015 this afternoon in Lake Buena Vista, Fla., the National Wireless Safety Alliance (NWSA) has been formed as a non-profit agency to assess and certify, through an NWSA-credentialed practical examiner’s (PE) evaluation and third party computer-based testing, that workers meet the criteria established in the National Wireless Skills-Based Training Standard.

In a somewhat confusing alphabet soup of new training initiatives from different public and private sectors announced in the past six months, today’s presentation provided a clearer picture of what appears to be the largest and most developed plan for industry education, training and national certification to date, although it was emphasized that the full structure remained a work in progress such as deciding not to use the acronym “PE” for a practical examiner since it’s a title normally associated with a professional engineer.

The skills–based training standard, which currently details the minimum competencies for three foundational industry positions, Telecommunications Tower Tech l, Telecommunications Tower Tech ll and Lead/Foreman, was developed by a subcommittee of the Wireless Industry Safety Task Force (WISTF), an organization comprised of almost all of the major wireless players, from carriers to tower owners and construction companies, and significantly supported by NATE.

However, an official national assessment and certification arm was required and the NWSA organization was incorporated recently.

The NWSA model encourages workers and companies to continue utilizing the training pathways of their choice. For example, companies and individuals who currently utilize private training options, offer their own internal training programs or go to a local community college for their training will continue to be able to do so.

It will also allow trainers to enhance their current offerings to provide technical training for what has been termed Triple-Tl and Triple-Tll certifications in addition to Lead/Foreman.

“I want to make it clear, we’re not in the training business,” Schlekeway said, emphasizing that NWSA only “provides the framework for competency.”

He said that the NWSA was “providing a playbook for all existing training companies to utilize.”

Although the NWSA hasn’t fully developed the PE registration process for practical examiners, it is expected that the method will allow training companies and contractors to have their on-staff employees become qualified practical examiners so that the assessment exam can be taken at the end of the training session, even before the computer based testing is done.

It is not known what testing agency the NWSA will use for the computer-based examination. It is likely that the governance arm will consider PSI or a similar organization. PSI currently has approximately 500 test centers throughout the country and is used by the FAA and other public agencies and private certification associations.

A Board of Governors representing a broad cross-section of industry stakeholders will be appointed in the near future to provide oversight for NWSA. Schlekeway said that tower climbers will be represented on the Board.

“Their inclusion might stifle some people who believe that this is just another attempt to treat climbers as second class citizens,” said a company owner following the luncheon session. “There are always those who are shouting that ‘we need a union’. What we need is this program so that we can elevate climbers to the trained certifications status that they deserve.”

Board member Jim Tracy, who co-presented the initiative’s progress, explained that once an individual  becomes certified that the NWSA will have them listed in their national database so that the worker can easily log into their web site and identify that he or she is trained and up to date with other required certifications.

Because of all of the moving parts that have to be corralled before certifications will be able to be issued, Tracy said he was not comfortable with providing a time frame, but said that all of the stakeholders were working at a feverish pitch to get it out as soon as possible.

“This is an exciting day in the industry,” said Pat Moore, Vice President of Operations at Velocitel, Inc., in a press statement.

“Creating a national assessment and certification entity is the next logical step in order to ensure that industry workers in the future will be trained in accordance to the various worker categories outlined in the National Wireless Skills-Based Training Standard,” Moore said.

Greg Corbitt, construction manager for Bechtel’s communications business, said that his company, which championed the need for 100% tie off in 1995, is fully behind the initiative . “We look forward to continuing our involvement and bringing the NWSA assessment and certification offerings to market”.

“Ericsson has been a proud member of the Wireless Industry Safety Task Force since its inception and believes this free-market national assessment and certification organization will ultimately help raise the bar on industry safety and quality,” said Dieter Schifferdecker, an Environmental Health and Safety Manager for Ericsson.

Members of the Wireless Industry Safety Task Force said that they will provide “transparent, timely and relevant updates to the industry as key benchmarks are achieved in the establishment of the NWSA assessment and certification program.”

“NATE is excited to play a leadership role in the establishment of the NWSA,” said NATE Chairwoman Pat Cipov. “There is a lot of work in front of us, but we have the subject matter experts and industry partners to develop a first class national assessment and certification organization.”

PCIA’s certification program’s progress unknown
Another training initiative, the Telecommunications Industry Registered Apprenticeship program (TIRAP), launched in October, is in the formative stages of rolling out a Department of Labor-credentialed apprenticeship program available to qualified employers for the training and career development of the telecommunications workforce. PCIA – The Wireless Infrastructure Association said in a statement that it is taking an active role in advancing TIRAP’s program.

PCIA has previously stated that they were working on a training and education initiative, which will seek industry-consensus to establish and launch a “certification program and develop a database so employers can track those credentials,” but has offered no details as to their progress or industry support.

In January, they hired John Harrison, a former Sprint executive as a consultant to the workforce program, and last week announced that former Verizon executive Marissa Mitrovich joined the association as Vice President of Program Development. In that role she will also be involved in the association’s training initiative and certification program.