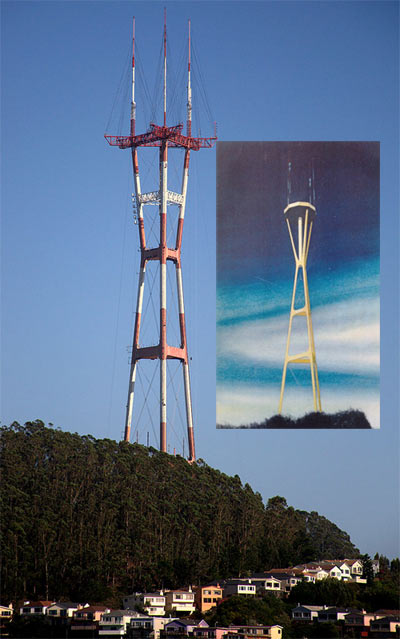 Early design renderings of the Sutro Tower included a restaurant at the top, Original plans showed a tower with a golden hue, but federal regulations required the tower to be painted with alternating bands of aviation orange and white.

If the legendary Mount Sutro broadcast tower in San Francisco was being proposed today it is unlikely that it would have much of a chance for approval as residents would mobilize in force to let city commissioners know of their concerns through open meetings and social media.

But in the 1960s San Francisco had really bad television reception and perhaps a collusive broadcast community that shepherded the 977-foot Kline structure through city commissions as ABC stonewalled a few protesters with an empty threat, according to an in depth article by KQED radio’s Jessica Placzek.

“What the people were told was very simply this: either you go away and you let us build our tower, or we will make sure the open space around Mount Sutro is torn down and all of the green belt is removed,” said Christine Linnenbach, a lawyer who has fought Sutro Tower Inc. in court and whose childhood home is a few blocks from the tower.

The KQED story said, the neighbors didn’t know that this was an empty threat. The park was already included in the city’s plan for a greenbelt. But their fear of losing the park caused residents to keep quiet and ABC used the “lack of neighborhood opposition” to help push the Mount Sutro site through.

When construction finally began in 1971, the local media was silent. Television stations involved had made a “gentleman’s agreement” not to report on the tower and the San Rafael Daily Independent Journal said it was because they knew the tower would be unpopular, according to Placzek.