A number of TV journalists covering the collapse of a cell tower in Wittmann, Ariz. on Saturday afternoon appeared to display that investigative reporting is not their strong suit 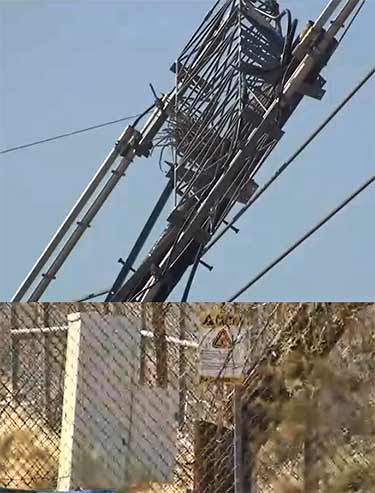 A wooden monopole had fallen on high tension power lines causing a power outage that left nearly 2,000 customers without electricity.

While Arizona Public Service brought in a crew to remove the cell tower from the overhead power lines near 211th and Grand avenues, reporters covering the incident, stated that it was not clear what could have caused the structure to topple, while their cameraman was providing close-ups of the base of the pole which had been obviously cut diagonally with a chain saw so that it would fall on the power lines.

On Sunday afternoon, local media informed their viewers that the cell tower’s collapse was due to sabotage, according to the Maricopa County Sheriff’s Office which identified that the base of the pole had been purposely cut.

The outage came during a near record-breaking heat wave in Arizona. Many residents found themselves sweating it out with no air conditioning and no cell phone coverage. Power was returned late Saturday night.

Authorities did not release the name of the tower owner, but American Tower Corporation has a 60-foot wood pole with four 12-foot omni antennas at the location shown during TV coverage.

Saturday’s sabotage was the second tower American Tower lost in the past week. Last Tuesday a Newport News, Virg. monopole they own was destroyed when it caught fire when welders ignited the structure’s transmission lines.