In a deal that took many industry observers by surprise, DAS developer ExteNet Systems, Inc. announced that Digital Bridge Holdings and Stonepeak Infrastructure Partners will recapitalize the company with more than $1 billion dollars, and Digital Bridge’s CEO Marc Ganzi will assume the position of Chairman of the Board. 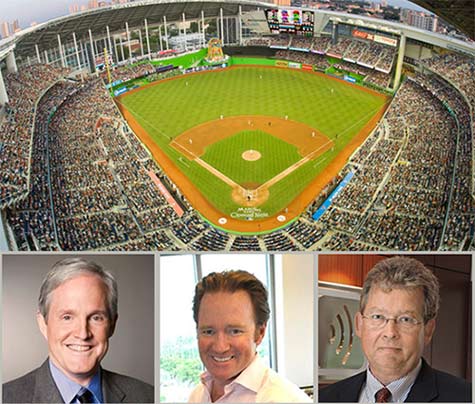 ExteNet Systems, which has a number of valuable DAS systems such as the one in Marlins Stadium in Miami, will have Ross Manire (from left) stay on as CEO. Marc Ganzi will become the company’s Chairman of the Board. Jeffery Stoops, CEO, of SBA Communications backed away from acquiring ExteNet, but hit a home run for SBA, capturing a $150 million profit on its $43 million investment. However, its exit leaves a gaping hole in the products it’s capable of offering carriers.

Key members of the ExteNet executive management team, including co-founder and CEO Ross Manire, will remain with the company

In January, TAP Advisors was seeking a buyer for ExteNet and the prime candidates were Crown Castle and SBA Communications, especially SBA since the company was a key lender and part owner of ExteNet, and had recently said that it would like to take a more active role in the company that was also funded by a number of venture capital groups.

SBA President and CEO Jeffrey Stoops was aware of TAP’s activities, and during a February conference call on SBA’s Q4 results, Stoops told analysts, “We like ExteNet a lot. They are good guys; we think they do very well, and if we had an opportunity to increase our position there, we would certainly consider it.”

Stoops went on to state, “We think small cells — I do have an improving view of small cells. Clearly, the last couple years at current times has demonstrated that it is going to be a permanent part of network architecture going forward.”

He said that, “We do believe that, if well executed and well-priced, that there are projects and networks in that business that can perform to the tower model, which is why we continue to be constructive around that.”

Price could have been a factor in SBA’s change of mind
But it appears that ExteNet’s billion-dollar-plus offer was too well-priced for SBA and the company did not see it as valuable asset, but liked the cash buyout that they will receive. According to Kevin Smithen of Macquarie Securities SBA will receive a $150 million profit on its initial investment of approximately $43 million.

Crown Castle CEO Ben Moreland, who had looked into acquiring the ExteNet asset, in a couched comment might be agreeing that it was a good move for SBA to not acquire the company that was earlier assessed by analysts to be worth $700 to $800 million.

In a an analysts’ conference call on Thursday, Moreland said in response to a question whether he was surprised that SBA didn’t acquire ExteNet, “Well, look, as you can tell, we’re very pleased with the business. And I think that the ExteNet transaction is – obviously, it’s tremendous for the shareholders that are exiting. And I think it’s a validation of the opportunity that we see in the marketplace with Digital Bridge coming in.”

Had Crown Castle been willing to top Stonepeak and Digital Bridge’s offer, it would have become the largest DAS and small cell developer in the nation, making it difficult for other companies to compete.

SBA acquired its early DAS assets after it purchased Lightower in 2008.

In an industry known for companies selling their assets and then reentering the market, it’s possible that SBA will take the cash it will receive following the ExteNet deal’s closing and start a competitive DAS venture since it will be the only major tower operator without a significant presence in DAS and small cells.

Not being able to provide DAS services could be a concern of carriers. SBA recognizes the need for DAS, and still promotes ExteNet on their web site with: “These services are complementary to our tower and rooftop solutions. ExteNet Systems also offers unique solutions for in-building applications, offering both proprietary single carrier solutions as well as multi-tenant solutions – in both private and public venues.”

Ganzi, who is known for his ability to raise capital quickly based upon his past successes and the robust nature of the wireless industry, plus the benefits of being a private company, leveraged his relationship with Stonepeak Infrastructure Partners to help make the deal.

Stonepeak Infrastructure is an investor in Vertical Bridge, a tower company owned by Digital Bridge.

Ganzi co-founded Digital Bridge in 2013 along with Ben Jenkins, the former Chairman of Global Tower Partners.