The message is clear, 100% tie-off at all times. The message that you shouldn’t allow someone to be climbing a tower without adequate PPE, training and supervision is even clearer, especially since a 28-year-old Texas woman died last March after her boyfriend took her on a test climb on a site where he had no authorization to be and she fell and died. 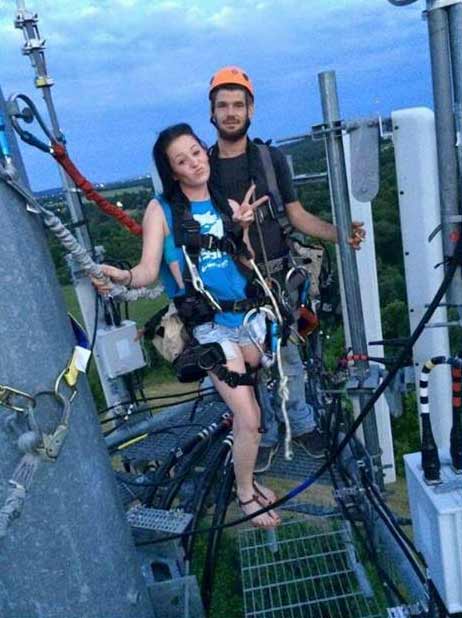 But a tower technician didn’t get the message and posted a similar photo on social media with his girlfriend in her petulant pose, open-toed sandals, no hard hat, and tight shorts.

The twosome will go into Wireless Estimator’s Hall of Shame and  the article will likely be redistributed to hiring personnel to ensure that they know that the man is incapable of getting the all-important communication that working aloft is serious business.

And if viewers know where he is presently working, they should let the tech’s employer know about their employee’s total disregard for safety.

Every day on Facebook and other social media the industry can witness climbing and rigging infractions that cause one to nod in disbelief; this photograph, however, has every professional worker’s head spinning like a drunken dreidel.

Although the photograph could have been taken on a time release phone or camera, there may have been a third person who was complicit in ignoring safety violations, as identified by a third lanyard.

A graphic artist contacted by Wireless Estimator said he did not believe the photograph was Photoshopped since there were no pixel variations between the woman and the background that should be apparent with so many areas that require silhouetting requirements such as the lanyard she is holding onto.