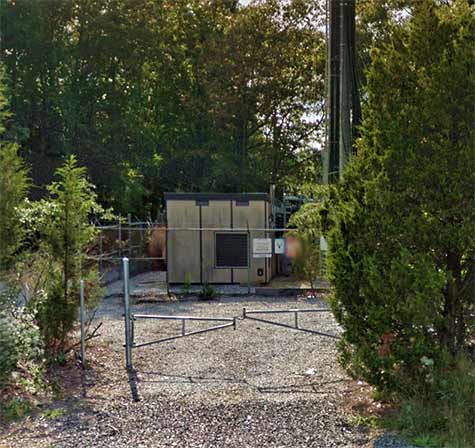 Louis Lucas was allegedly taking batteries and copper from this monopole site when an officer assigned to a special detail watching cell towers arrested the Clarksboro, N.J. man.

While most industry workers were celebrating July 4th with a well-deserved day off, tower technician Louis Lucas, 45, was one of the few that had to be on duty to service a cell site at 1191 Williamstown Rd., Gloucester Township, N.J.

Pickard had been assigned to an extra patrol of area cell towers, when he saw a suspicious vehicle backed against the tower at about 9:15 a.m., according to a news release issued Saturday.

As the officer exited his car, he saw a man inside the site’s fenced-in area, taking apart an electrical box and removing equipment, police said.

Lucas claimed to be a subcontractor for a company that performs maintenance on cellular towers, but an investigation by authorities revealed he hadn’t worked with the firm for some time.

Officers also discovered large cellular UPS batteries and copper wire inside Lucas’ vehicle, which was towed to police headquarters, according to investigators.

Instead of getting double time for working on a holiday, Lucas is spending time in the Camden County Jail, where he was being held in default of bail.

Lucas’ Facebook page said that his previous employer was LandAir Wireless; a spokesperson for the Cherry Hill company said this morning that he had not been employed there since approximately February.