Update: April 6, 2015 – According to an individual knowledgeable of the incident where two tower technicians were shocked as their lift came in a contact with a power line on April 1, 2015, the techs did not have to jump to the ground as stated by a Beloit, Wisc. fire official, but were lowered to the ground by the operator. Both men were employed by Frontline Communications Contracting, Inc., according to OSHA’s open investigation. 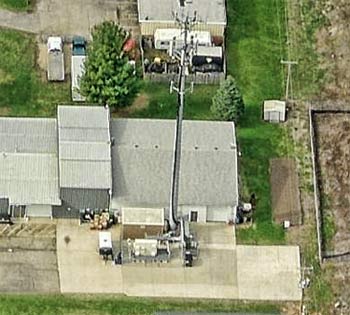 In addition, only one of the men had a small burn mark on his side and forearm from leaning on the lift when it came in contact with the line.

However, the two workers were shook up from the scare and said they were physically fine, but as a precaution they were sent to the hospital to be examined for any other injury as a result of the electrical shock.

According to information that was being provided while OSHA was investigating the incident, the lift placement was 25-feet away from the lines and while the operator was booming up, he was also telescoping out which brought him into the range of the power lines. The men were in the basket facing away from the power lines as they were being lifted to their work location.

It appears that although the operator had been trained how to use the lift and operates one on a regular basis, he wasn’t being observant during the lift, and agrees that on all future lifts there will be a spotter on the ground as well as in the manbasket whenever they are within any proximity to power lines.

– – – – – – – – – – – – – – –
April 2, 2015 – OSHA is investigating the near electrocution of two tower technicians yesterday while they were working on a cell tower in Beloit, Wisc. when their aerial lift came in contact with a 75,000 volt line to the rear of the monopole, Beloit Fire Department Lt. Keith Lynn told Wireless Estimator. He also stated that the men had been working for a Chicago contractor, but he could not release the company’s name or the names of the employees.

The techs were working on a U.S. Cellular Corporation 100-foot multi-tenant tower on Park Ave. when their bucket truck came in contact with transmission lines and set the tires on fire shortly before 9:00 a.m.

According to fire authorities, the two men jumped from the bucket at approximately 20-30 feet. They suffered electrical burns to their torso and arms and were transported to Beloit Memorial Hospital where they are expected to fully recover.

Lynn could not immediately identify whether the bucket truck physically made contact with the wires or if there was an arc flash because the vehicle was too close to them.

Preventative measures need to be assessed
“When the job safety analysis is performed, overhead power lines near the work site must be identified. Tower professionals evaluating the proximity of power lines should contact the electric utility to determine the voltage and mandatory minimum approach distance specified by OSHA and the state’s high voltage safety laws,” said Jimmy Miller, President and CEO of MillerCo, Inc., one of the nation’s leading wireless contractors with 10 operational centers in the country. 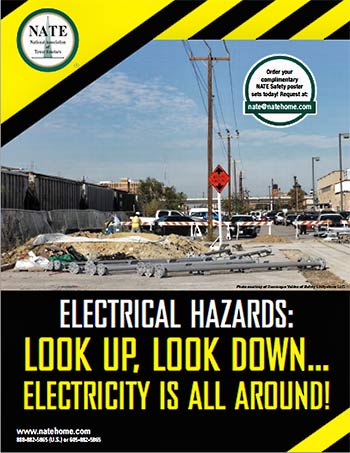 “OSHA’s minimum distance is 10 feet and it increases as the voltage increases. Work inside of the OSHA or state minimum is prohibited. A good work practice is to mark the minimum approach distance on the ground with stakes, flagging, cones or physical barriers to assist the tower professional in maintaining a safe distance away from the power lines,” said Miller who also serves as a board member of the National Association of Tower Erectors.

The NATE Safety and Education Committee has developed a set of six new safety posters, one of which is an Electrical Safety Hazard poster.