A common thread throughout yesterday’s PCIA – The Wireless Infrastructure Association’s Hollywood, Fla. conference was that AT&T has pulled back on their builds, Sprint is almost in a holding pattern and T-Mobile is providing a number of opportunities. Verizon, however, is seen as a steady engine that is assisting a slower than expected build in the second quarter. 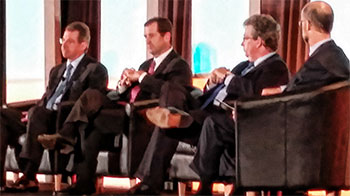 “Verizon continues to be the steadiest in their levels of spending,” said SBA Communications President and CEO Jeffery Stoops at the View from the Top session where the nation’s three largest tower owners’ executives provided their insight. He said that “there is so much activity out there and so much to be done,” but he believes it will not hit in 2015.

The session also focused upon climber safety and industry initiatives that are being taken.

Although as late as last October trade associations and others were heralding the need for additional tower technicians to fill a serious workforce shortage, Stoops said that “The labor shortage was resolved a year or two ago.”

W. Benjamin Moreland, President and CEO, Crown Castle International, agreed, stating, “We don’t have the labor shortage we had a few years ago.”

The need for adequate training and how PCIA was working with TIRAP and Warriors for Wireless were also discussed.

Broadcast installation crews and ‘Twilight towers’ a concern
During a keynote session, Federal Communications Commissioner Michael O’Rielly emphasized that spectrum alone will not benefit this nation’s wireless consumers without networks and infrastructure. 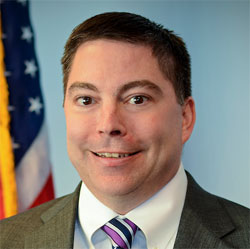 O’Reilly said that the Commission is in the process of releasing more spectrum into the marketplace.

“We recently completed the AWS-3 auction, raising almost $45 billion in gross revenues, demonstrating the great demand for exclusive use licenses. Similarly, we will have the broadcast incentive auction, currently scheduled for early 2016, which will reallocate broadcast spectrum to wireless use.”

O’Reilly said he believes that crews that work on tall towers may be limited.

“This workforce shortage could be exacerbated if these crews also happen to work on broadcast towers, because the incentive auction repacking process will be occurring simultaneously with AWS-3 and 600 MHz buildout. If this skilled workforce is insufficient for the number of required jobs, work orders may get backed up. This may conflict with meeting the 39-month repacking deadline and create a domino effect for wireless,” said O’Reilly.

Industry insiders also believe that there might be a shortage of tall tower and antenna manufacturers available to meet the deadline.

O’Reilly emphasized that the  Commission should tackle the problem of ‘twilight towers,’ structures constructed between March 2001 and March 2005 that were not specifically required to go through historic preservation review process.

“I know that Commission staff, industry and other stakeholders have been working together to resolve this issue that affects somewhere between 4000-7000 tower structures. Until this review is concluded, these towers remain in regulatory purgatory; no antennas can legally collocate on these structures.”

“We need networks to be deployed; we cannot afford to have towers that are not filled to capacity. Is it really preferable to have antennas not installed or duplicative towers built while we sort out this quandary? And one final note, it would seem to make sense that this process be done collaboratively, without the need for enforcement action against these tower owners, who are trying to resolve the issue in a productive way,” he said.