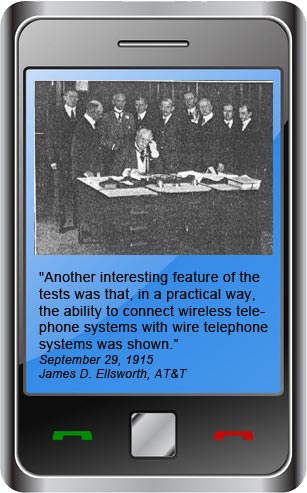 Its impact was revolutionary since the First World War was in progress in Europe and it would be the forerunner of how wireless could reshape the military and commercial applications. It was also heralded by AT&T as providing the glue that would tie wireless and wireline services together.

The tests had been carried out by the American Telephone & Telegraph Co. (AT&T) and the Western Electric Co. in cooperation with radio stations under Navy jurisdiction.

In his formal announcement, Secretary of the Navy Josephus Daniels said: “The use of such long distance wireless telephone communications in naval or military operations is still in an undeveloped state, but it is expected valuable use can be made of the wonderful demonstration; but aside from such considerations the department and its officials feel proud that they have been interested co-operators in the first practical development of this last march in the wonderful science of radio communication.”

James D. Ellsworth, of AT&T said, in part: “That transatlantic wireless telephone communication is assured as soon as the disturbed condition in Europe will permit of tests from this country to there, is obvious when it is remembered that all scientists agree on the fact that it is much more difficult to send wireless telephone communications across land than across water. This wireless telephone message from Washington to Hawaii had to pass over the whole of the United States–a distance of 2,500 miles–before it encountered better wireless conditions which exist when sending over large bodies of water.”

“Another interesting feature of the tests was that, in a practical way, the ability to connect wireless telephone systems with wire telephone systems was shown. You have no doubt noted that Mr. Vail in his talk used a wire circuit from New York to Washington. At Washington, by the special means invented and developed by the engineers of this company, the wires were connected to our special wireless apparatus and to the navy’s mighty wireless tower, where the message went wirelessly to its destination.”

Ellsworth, who died in 1940, could not have realized how prophetic his comments were regarding the synergies of wireless and wireline.

AT&T is perhaps the best-known company that invested early in a specialized media relations program. In 1903 Ellsworth began working on the telephone company’s press relations for the Publicity Bureau, reportedly decreasing the number of negative press clippings from 90% to 20% in a few short years.