Former Governor of Alaska and Vice Presidential candidate Sarah Palin’s keynote speech at NATE UNITE 2015 on Wednesday in Lake Buena Vista, Fla. provided a folksy and entertaining 36-minute reprieve from industry-related discussions that have highlighted what is being identified as the organization’s largest and most energized conference in the trade group’s 20-year history. 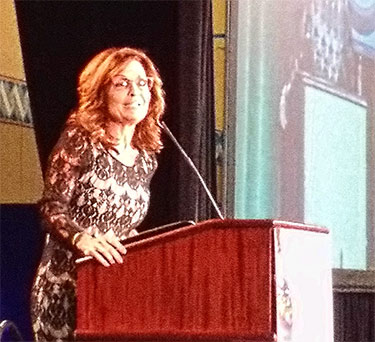 An avid hunter, Sarah Palin told the overflow crowd that she was used to some of her food coming wrapped in fur, not cellophane

As expected, Palin lampooned President Obama numerous times; her first concern being his administration’s introduction of 1,200 new regulations in 2015 that she said will cost America’s taxpayers $181 billion.

She also criticized President Obama for pushing the FCC to approve new rules that were passed today on net neutrality that she believes will smother the internet with unnecessary regulation, although she may not be aware that it could provide a benefit to the industry.

It will most likely jettison completely the arguments of municipalities that DAS or small cell services offered by third party providers are not “telecommunications” and therefore are not entitled to the protections of federal or state laws.

“Do you want the same bureaucrats that run the Obama care web site to regulate the internet? I dare say no,” said Palin.

Palin received multiple ovations for her support of America’s veterans and especially her involvement in the ‘American Sniper’ Chris Kyle Foundation.

Answering a question from NATE Executive Director Todd Schlekeway as to how the siting community can work with local government to ease deployment roadblocks, she briefly talked about her involvement in community politics when she was Mayor of Wasilla, but offered no advice, instead segueing into the corruption that she found in the oil industry.

She received considerable laughter when she said, “There were too many politicians in bed with big oil, and granted, I was married to an oil worker that I was in bed with.” 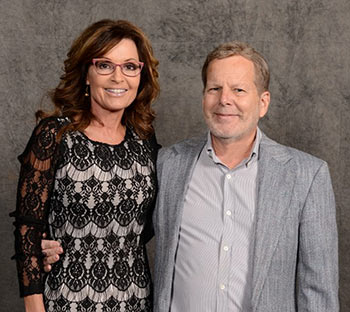 But then there was a wave of groans from the audience, the majority of which were company owners, executives and managers, when she continued with, “He wasn’t in management, he actually worked.”

Palin said that harsh weather conditions in Alaska would have tower techs working in temperatures 60 to 70 degrees below zero.

She took the opportunity to discuss the recent New York and Northeast blizzards, joking that compared to what folks are used to in Alaska that those folks complaining recently were “wimps”.

Palin’s handlers would not allow national media to attend the luncheon.