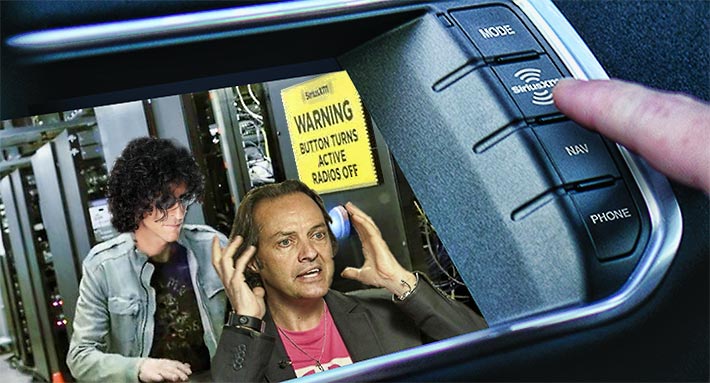 After a number of Sirius XM customers complained to the satellite radio company last year that they were losing their radio signal in some urban markets, Sirius did some drive-by tests and said they found the guilty party, T-Mobile.

The company said T-Mobile was interrupting its service to the point that it was “alarmingly severe, extensive and frequent,” but T-Mobile has said that it isn’t their responsibility since the interference is being caused by Sirius XM’s radios.

T-Mobile said the receivers weren’t engineered correctly to block the interference, and the carrier was operating within the FCC’s guidelines.

Although both companies are trying to address the issue, Sirius believes that the likelihood of it being resolved by the FCC in the near future is slim and the company is supporting new FCC rules proposed by the University of Colorado Law School Samuelson-Glushko Technology Law and Policy Clinic’s petition that would place all radio interference disputes before an Administrative Law Judge.

T-Mobile told the FCC on Sept. 10, 2015, not to adopt the plan endorsed by Sirius since the proposed solution would be worse than the problem it claims to address.

T-Mobile said in their comments replying to Sirius, rather than shortening the adjudication process, an administrative law proceeding that required a judge to “cast a wide net” of those potentially involved would lengthen the process and ensnare innocent parties in costly defenses.

“Creating a complicated trial-type process is exactly the wrong way to resolve engineering-based issues and would only open the door to further abuse,” T-Mobile said. “… The ALJ option would require parties to undergo the highly time-consuming discovery process and could potentially result in multiple reviews of disputes, which, in turn, could create delays in final resolution far beyond any delays experienced under the current rules.”

T-Mobile says Sirius is shifting the blame from its failures
T-Mobile said the FCC should instead increase the staffing that currently handles the complaints.

The carrier said that Sirus is seeking to shift the blame away from its failure to use sound engineering practices.

“Sirius makes much about the difficulty of operating in an increasingly crowded RF environment and of predicting potential interference scenarios from intermodulation effects. Yet these effects are well understood and Sirius must accept responsibility to manage its service in that environment. Sirius cannot be permitted to shift the responsibility for managing the environment to others – who operate wholly in compliance with the rules – and then seek to drag compliant licensees through an expensive and time consuming trial-type process that will potentially result in diminished service to customers. Responsible management of the RF environment must include designing a receiver that provides protection from readily anticipated intermodulation effects. Doing so is simply sound engineering practice, a practice in which Sirius, as a Commission licensee, is obligated to engage,” said Steve Sharkey from T-Mobile.

T-Mobile believe that going before an Administrative Law Judge would require parties to undergo the highly time-consuming discovery process and could potentially result in multiple reviews of disputes, which, in turn, could create delays in final resolution far beyond any delays experienced under the current rules.

Commission’s field offices could offer the best opportunity
In an earlier comment to the FCC, AT&T said the Commission’s field offices offer the best opportunity for resolving spectrum interference complaints, “by agents with hands-on practical experience that cannot be replicated by an ALJ. The Commission can make sure that the interference dispute resolution process remains fact-based, transparent, and timely by standardizing that process for all Field Offices, adopting a format and timelines for confirming receipt of a complaint and communicating key information with all parties to the dispute, and periodically analyzing the data generated from these complaints to ensure the appropriate allocation of resources.”

AT&T said these measures would allow the Commission, without the need for a rulemaking, to improve licensee’s ability to manage their spectrum.

“In the interference context, justice delayed is justice denied,” Sirius said in an Aug. 7, 2015 letter to the Commission. “Harmful interference (by definition) significantly impacts a victim’s ability to operate as intended, and the longer such interference is allowed to persist the greater harm the victim suffers. For an operating business, harmful interference has a significant potential to alienate existing and potential customers. A customer who cannot receive service simply will not continue to pay for that service.”

AT&T and Sirius had similar concerns, but  with a different spectrum
Sirius claims the problem arose with T-Mobile’s increased use of its advanced wireless services on a slice of airwaves referred to as AWS-1. The AWS band uses microwave frequencies in two segments: from 1710 to 1755 MHz for uplink, and from 2110 to 2155 MHz for downlink

In 2012 the FCC approved a compromise proposal submitted by AT&T and Sirius that protected Sirius by instituting unused bands that are next to the spectrum that Sirius uses.

The solution called for AT&T to divide its 20 MHz of Wireless Communication Service spectrum into four 5 MHz channels. AT&T agreed to not use the two 5 MHz slivers of wireless spectrum closest to the spectrum Sirius uses. That 10 MHz of spectrum serves as a buffer to help avoid interference.

Then FCC Chairman Julius Genachowski said that the Commission had intervened and pressed AT&T and Sirius to come up with a solution on their own.

The WCS and the Satellite Digital Audio Radio Service (SDARS) occupy 55 megahertz of RF spectrum, frequently referred to as the “2.3 GHz band,” from 2305 2360 MHz. The SDARS occupies the center portion of the 2.3 GHz band at 2320 2345 MHz, and this spectrum is divided evenly between two separate, but co owned, SDARS networks, Sirius and XM. The WCS occupies frequency bands on either side of the SDARS allocation and consists of 4 blocks in the 2305-2320 and 2345 2360 MHz bands: two 10-megahertz blocks (paired 5-megahertz blocks) and two unpaired 5-megahertz blocks, according to the FCC.

AT&T has recently deployed it 2.3 GHz WCS spectrum for LTE service in a number of markets which requires adding another remote radio head at each cell site since all of the antennas the carrier has deployed recently are antennas that include support for the WCS spectrum.

Shades of LighSquared
In 2011 when LightSquared wasn’t granted approval by the FCC to build a planned network of 40,000 broadband towers because industry experts said that the system would cause interference with GPS receivers, LightSquared said it wasn’t their fault, but that the GPS receivers were the problem because they were “listening outside of their band.”

It’s a similar scenario regarding T-Mobile’s concerns about deficient receivers employed by Sirius.

LightSquared’s tried to turn the tables on GPS industry advocates by arguing that GPS devices “inappropriately violate our licensed spectrum” and not the other way around, but it was ineffective.