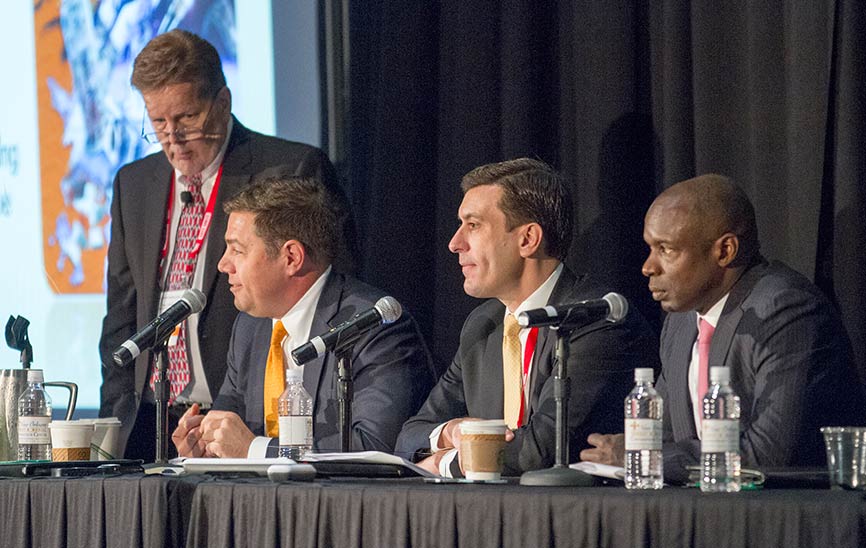 As three leading industry experts gazed into their crystal balls Tuesday during their NATE UNITE 2016 presentation, “The Future of the Wireless Industry,” their consensus indicated a robust build program that could last for more than a decade.

However, Clayton Funk of Media Venture Partners, Christopher Fisher, Cuddy & Feder LLP; and Robert Paige, Vertical Bridge, cautioned National Association of Tower Erectors members that the industry can turn on a dime and their projections –  mostly all capital expense driven – could result in a cyclical work flow as it has in years past.

Whether the industry had enough tower crews to safely handle the ambitious deadline for implementation following the FCC’s upcoming incentive auction of TV broadcasters’ 600 MHz spectrum, was a concern to panelists and an audience member, Jack Boone of Broadcast Tower Technologies, Inc., who said that his research indicated that there were more available crews than previous studies have shown.

The smaller number of NATE members who have the expertise and equipment to work on tall towers was evident during the session when only three of the approximately 300 attendees  indicated that their companies could work on those structures.

Also of interest was the number of NATE companies that work on distributed antenna systems and small cells. Only three attendees said their business performed those services.

The full session can be viewed on the RCR Wireless video below.

A number of key insights made during the standing room only session included: