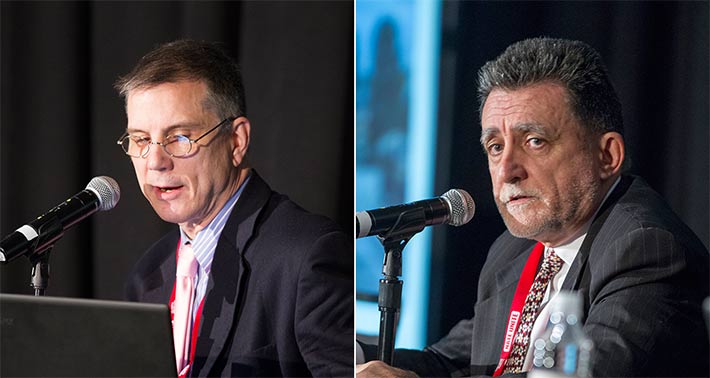 The ‘5G and Other Emerging Technologies’ session at last week’s NATE UNITE 2016 Conference discussed the next generation of wireless, what it will be used for and how it will impact companies employing tower technicians. The session featured John Celentano, wireless infrastructure consultant with Skyline Marketing Group, and J. Sharpe Smith, editor with the AGL Media Group.

Celentano described the advanced capabilities that 5G promises including user throughput of multiple Gbps with edge latency of less than 1 millisecond, bandwidth of at least 100 megahertz and reliable duplex operation. 5G networks will enable ultra-high definition video, any-to-any device (IoT), connected vehicles/homes, tele-medicine, virtual reality, remote control of industrial sites, and wearables. However, the timeline for deployment of these technologies is projected at 2020 and beyond, he told the audience.

Smith noted that several 5G announcements at the Mobile World Congress indicate the technological power that is in the works. Nokia is collaborating with Verizon on a 5G field trial in Dallas-Fort Worth. delivering Ultra HD 4K video content. Nokia’s Bell Labs has demonstrated peak wireless data speeds of more than 30 Gpbs to an end user, and more than 1 million simultaneous connections in a single cell. Nokia launched a cloud-based radio access network (RAN) that supports multiple generation wireless technologies from 2G through 4G LTE and it is 5G-ready, as well.

Celentano and Smith raised doubts that wireless carriers will find a business model to make 5G feasible without continued and sustained capital investments in their network infrastructure, saying that exponential data use growth makes increased capacity an imperative. Additionally, increased capacity for HD video on the high end, and machine to machine (M2M) communications on the low end will bring new revenue flows previously unattainable.

“Moore’s Law economics brings the radios closer to the users from macrocells down to nodes, access points and endpoints, which leads to greater network densification,” Celentano said.

What does the emerging technology of the future mean to today’s tower service companies? The deployment and maintenance of 5G technology will bring plenty above ground level as well as near ground level work, according to Celentano.

“There will be big demand for skilled cell site installers and testers for all sizes of sites. Every site requires radios, antennas and backhaul, much of which will be with fiber cable. We still need to test for  RF performance, optical transmission and passive intermodulation (PIM) interference,” Celentano said.

Smith said in the future tower climbers will be needed as much for their communications technician skills — network optimization and data networking — as for their climbing skills. “You are in the connectivity business,” he said. “It won’t matter what height you are working at; the skillset is the same.