The National Wireless Safety Alliance (NWSA) convened its 28-member Board of Governors yesterday in New Orleans, La. to discuss key action items and activities related to the organization’s worker certification program development process. The NWSA Board of Governors consists of representatives from a broad cross-section of the industry and are tasked with developing policy and overseeing the activities of the various Committees that will serve under their jurisdiction. 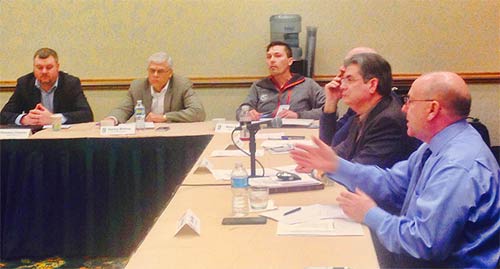 Don Doty, at right, discusses a number of initiatives that the NWSA is working on. Doty recently replaced Jim Tracy as President of the Board of Directors, who was recently elected as Chairman of the National Association of Tower Erectors. Art Pregler, Chairman of the NWSA Board of Governors, to the right of Doty, updated the Governors at their meeting.

The NWSA Governors also devoted significant time during the meeting to looking ahead to the organization’s roadmap for the remainder of 2016. The NWSA’s TTTI and TTTII certification programs are slated to be unveiled to the wireless industry marketplace in the 4th quarter of 2016. In the months ahead, the NWSA Board of Governors will also be tasked with defining the role and function of an Exam Management Committee, an Ethics and Discipline Committee and an Appeals Committee. Additionally, the NWSA Governors began formal discussions on the organization’s future certification programs that will be developed, including Antenna & Line Foreman, Tower (Stacking) Foreman, Structural Modifications Foreman, DAS Systems, Small Cell Systems and Broadcast Structures.

“Today’s meeting was extremely productive and it has been great to see the outstanding progress that has been made in the NWSA’s quest to develop ANSI ISO 17024 nationally accredited certification programs for the wireless industry’s workforce,” stated NWSA Board of Governors Chairman Art Pregler from AT&T. “The NWSA has been successful in building an outstanding team of over 50 industry subject matter experts who have been instrumental in working to create the NWSA’s Computer Based and Field-Based assessments for various categories of workers in the industry,” said Pregler.