Update: July 27, 2016 – The video was removed from YouTube two hours after Wireless Estimator published the story. An edited portion of it is still available here.

We seldom publish them, opting to promote proactive articles and safety videos such as those produced by the National Association of Tower Erectors and the Telecommunications Industry Registered Apprenticeship Program. 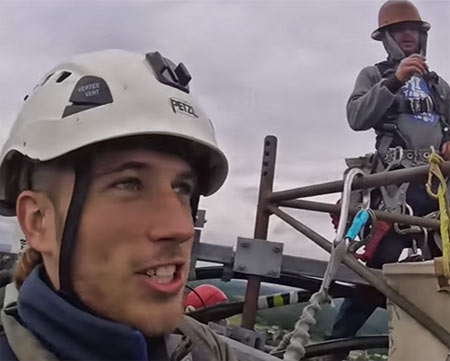 Pat Daley, left, said that after a few shots and beers the evening before, a tower crew invited him to their job site to video his climb and their installation. He had no training in climbing safety.

However, a number of our viewers alerted us recently to a YouTube video, above, published on June 20, 2016 that is rather alarming, not so much in regards to some safety violations that you will see if you surgically dissect it, but because a five man tower crew allowed an inexperienced video blogger in sneakers to climb alongside them to film while they were in the process of upgrading a carrier’s install.

It begins at an unidentified Pennsylvania tower site with Pat Daley narrating, “It’s almost 7:00 a.m., I’m going to climb up a cell phone tower with guys I met in a bar last night. It sounds like a good idea, right?”

The answer is obvious – wrong!

Although Mike Rowe featured Great Plains Towers on an episode of Dirty Jobs and climbed alongside crew members, Rowe had training, supervision and enough indemnification paperwork provided to Great Plains that could have served as a spare headache ball.

But it’s highly unlikely that the tower crew, identified as John, Kyle, Dillon, Drew and Ryan, had enough time between last call and their wakeup call to get permission from their company’s owner, their turfing or prime contractor and the owner of the tower to allow an uninsured and untrained young man to risk his life with a 130-foot first time climb, that they agreed to allow after a “few shots and beers,” according to Daley.

The video provides a sobering message that we have a long way to go in achieving an industry-wide culture of worker safety since it appears that not one of the five tower techs objected to the foolishness of allowing the blogger to risk his life.

As one safety manager correctly stated in an email to Wireless Estimator, “It is videos such as these that hold the industry back, not promote professionalism; the old school ways need to be left behind. The industry has made more safety progress in the last 4 or 5 years than ever before and I hate to see such demonstrations of stupidity linger.”

“It reminded me of the loss of Stephanie Gurney a couple of years ago. Maybe the video can serve as a reminder that we still have work to do to keep people safe,” he wrote.