Bankrupt Alpine PCS, a successful bidder in two California spectrum deals in a 1996 Federal Communications C-Block auction, has filed a $21 million lawsuit in the U.S. Court of Federal Claims, against the FCC that alleges the agency breached a written and oral contract when it found the Michigan-based carrier in default of payment for its licenses and re-auctioned them. 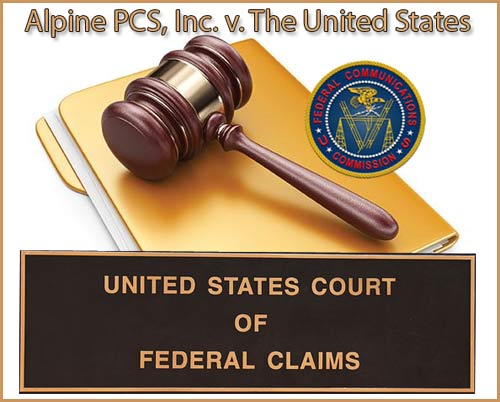 In its complaint, Alpine said that as a small business designated entity, the company was entitled it to pay off its two licenses, San Luis Obispo at $8,901,900 and Santa Barbara at $17,280,675, with an interest rate of 7%, in installments.

Alpine then began to construct its PCS networks, investing some $90 million while paying off their debt to the FCC for five years.

Their agreement with the FCC, according to documents, allowed Alpine certain remedies before they were in default, but the suit alleges that in 1998, 47 CFR 1.2110 was amended to provide that in the event of two consecutive 90 day periods of missed payments the licenses would “automatically cancel”.

In the early 2000’s, Alpine encountered serious business difficulties relating to both significant disputes with its primary hardware vendor as well as collapses in the spectrum and financial markets caused largely by the 9/11 tragedy.

Alpine said in its suit that it then reached out to the FCC and discussed the fact that it would likely be unable to continue to make scheduled payments on the notes in the short term and that it would require a modification of the terms of the notes.

The PCS carrier said that in 2002 it was led to believe by the FCC that if it submitted appropriate restructuring and waiver requests that it would be able to continue operating the licenses.

Alpine submitted their written request for debt restructuring on July 24, 2002, before the company was in default under the then-applicable FCC rules, according to the lawsuit.

The following month, Alpine says, the FCC contacted them to begin the process of restructuring their obligations, but in October Alpine became aware that the FCC had changed the agency’s database license ownership information to indicate that the licenses had reverted to the FCC.

Alpine claims that the FCC said the change was a result of a “clerical error”.

Although Alpine states that the FCC had been talking to them in the first half of 2003, the agency ended discussions with them and on Jan. 16, 2004, it notified them that they were in default.

Over Alpine’s objection, including Alpine’s attempt to invoke the automatic stay attendant to a 2008 Chapter 11 bankruptcy petition, the FCC conducted the re-auctioning of the spectrum and markets of Alpine’s licenses and did auction them off for a combined total of $5,548,000, the suit claims.

Alpine said that they were not in default because their agreement stated they would not be in default if they submitted a request, in writing, for a grace period.

Alpine’s suit states that they could only have been in default of the notes if the FCC denied their requests, which it didn’t until Jan. 5, 2010, by which time the FCC had already re-auctioned the licenses.

In January 2013, Alpine filed a breach of contract suit against the FCC in district court. The court dismissed the suit for lack of subject matter jurisdiction on June 3, 2013.

A Bankruptcy Court had previously held that Alpine breached it contracts with the FCC by failing to make timely payments on the notes.

Alpine said the Bankruptcy Court didn’t really decide these claims as far as deciding the merits. They just had to decide whether it was a property question as to whether or not these licenses were within the estate and therefore subject to the jurisdiction of the Bankruptcy Court or not.

As it has argued in the past, the FCC will most likely state that “the pertinent statute gave Alpine six years to sue the United States from the date when its claims arose. Its contract claims surely arose by January 2004 when the FCC said very plainly, look, you don’t have these licenses anymore because you failed to pay. But Alpine didn’t sue within six years of that date. And similarly, its breach of fiduciary duty claims surely accrued by January of 2004 when the FCC said we’re not going to talk to you about a debt restructuring.”

Alpine’s filing yesterday, based upon the FCC’s denial on Jan. 5, 2010, would meet the six-year statutory requirement.