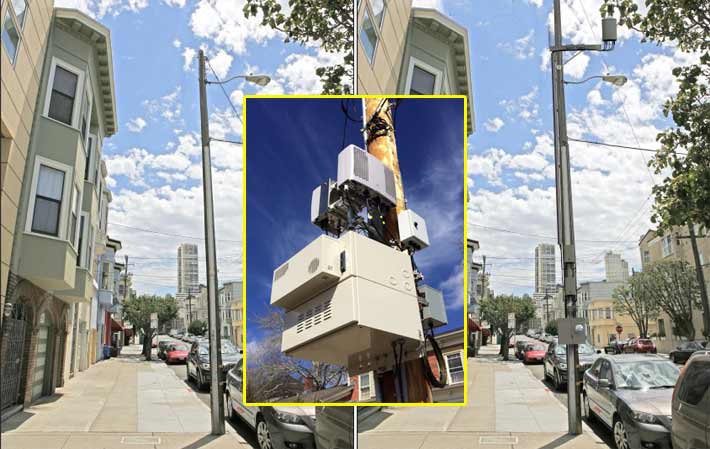 This San Francisco DAS site proposed by ExteNet for Verizon Wireless would most likely be a Tier ll permit; however, the over-sized DAS pole in the inset would be a Tier lll which would require an extensive permitting process that could easily rival a macro site.

A California appeals court ruled against T-Mobile, Crown Castle and ExteNet Systems last week when it affirmed a lower court ruling allowing the city of San Francisco to enforce broad aesthetic control regarding where small cells are placed.

The ordinance stated that it did not regulate the technologies used for small cells, but focused upon the city’s “needs to regulate placement of such facilities in order to prevent telecommunications providers from installing wireless antennas and associated equipment in the City’s public rights-of-way either in manners or in locations that will diminish the City’s beauty.”

The ordinance required a showing of technological or economic necessity for permit approval and created three “Tiers” of facilities based on equipment size.

Tier I was defined to include only the smallest equipment (essentially, primary and secondary equipment enclosures, each less than 3 cubic feet in volume and no greater than 12 inches wide and 10 inches deep).

Tier II was defined to allow equipment slightly larger in overall volume than Tier I (4 cubic feet), but with the same limits on width and depth.

Tier III was defined as any equipment larger than Tier II.

If the Department of Public Works (DPW) approved a Tier III application after recommendation by the Planning Department, the approval from DPW was only “tentative,” and the applicant was then required to notice the public.

The plaintiffs argued that San Francisco has singled out wireless equipment by requiring providers of commercial mobile services alone to obtain site-specific permits while “ignoring the aesthetics of identical equipment installed by other right of way occupants.”

The appeals court, however, sided with the city in upholding the trial court’s verdict that state law grants municipalities the authority to “exercise reasonable control as to the time, place, and manner in which roads, highways, and waterways are accessed.”

San Francisco stated before the courts that the City’s beauty is vital to its tourist industry and is an important reason for businesses to locate in the City and for residents to live there. “Beautiful views enhance property values and increase the City’s tax base. The City’s economy, as well as the health and well-being of all who visit, work or live in the City, depends in part on maintaining the City’s beauty,” San Francisco said in defense of the ordinance.

The ruling comes amid an industry-wide push to densify wireless networks with small cells ahead of 5G.