The National Wireless Safety Alliance (NWSA) announced today the hiring of wireless industry veteran Chuck Slagle as the organization’s Executive Director. Slagle, who previously served the NWSA in a consulting capacity, is a former Sprint Environmental Health & Safety Executive with over 38 years of experience in the industry. 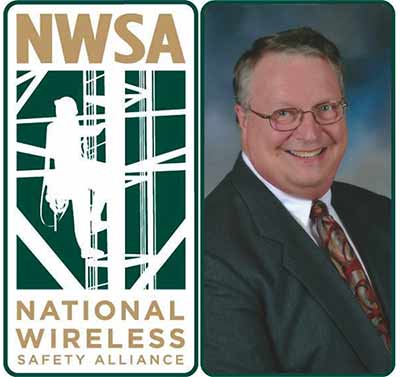 Chuck Slagle, who previously served the NWSA in a consulting capacity, has been hired as the organization’s executive director.

The NWSA’s leadership announced the hiring at the 2016 Wireless Infrastructure Show in Dallas, Tex.

“The NWSA is ecstatic to announce Chuck Slagle as the organization’s first official Executive Director,” said Board of Directors President Don Doty from FDH Velocitel, Inc. “Chuck has been instrumental to the NWSA during the organization’s formative stages and in his enhanced role as Executive Director will be able to spearhead the initiatives necessary in getting the NWSA’s ANSI Accredited assessment and certification programs to market,” added Doty.

The NWSA is a non-profit assessment and certification organization that has been established to provide thorough, independent assessments of knowledge and skills and provide verifiable worker certification in order to enhance safety, reduce workplace risk, improve quality, encourage training, and recognize the skilled professionals who work on towers and other non-standard structures.

“I am honored to serve as the Executive Director of the NWSA and look forward to working with the organization’s Board of Directors, Board of Governors, Committee Members and Subject Matter Experts,” said Slagle in a statement. “I believe that the national assessment and certification program currently under development by Task Force members from across the Industry will have a positive, transformational impact on the industry long-term” said Slagle.

Prior to his retirement from Sprint, Slagle held various positions within the Sprint EHS department, including Director of EHS. He holds certifications in Safety, Risk Management and Business Continuity. Slagle has also held leadership roles with the Environmental Health and Safety Communications Panel (EHSCP) and Wireless Industry Safety Task Force. He serves on the Crisis & Disaster Management Degree Advisory Board at the University of Central Missouri (Warrensburg, Missouri) and the Safety Degree Advisory Board at Purdue University (Calument, Indiana). He is a past member of the American Society of Safety Engineers (ASSE), the National Fire Protection Association (NFPA) and served as a member of the NFPA 76 Standards Committee for Fire Protection of Telecommunication Facilities.

Other potential assessment and certification programs the NWSA will likely unveil in the future include Antenna & Line Foreman, Tower (Stacking) Foreman, Structural Modifications Foreman, DAS Systems, Small Cell Systems, Broadcast Structures and Outside Plant/Fiber to the Home and Business.

Industry workers, companies and stakeholders are encouraged to visit the NWSA website at nws-a.org to learn more about the organization.