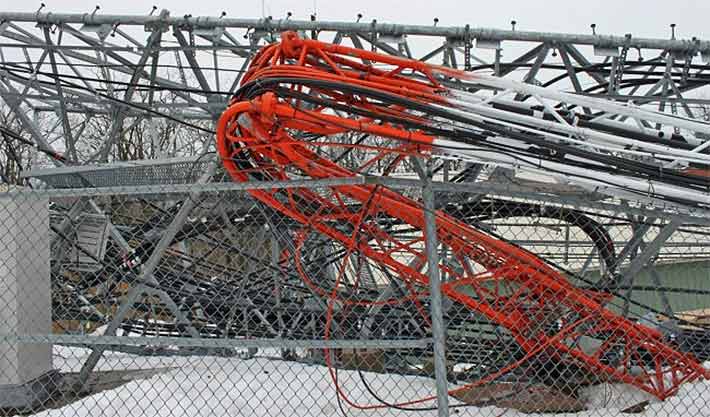 When the self-supporting tower collapsed it took down an adjoining tower with it. The owner of the towers said it was caused by Verizon.

A Massachusetts tower owner says Verizon acted without due caution in adding equipment to their tower, causing it to collapse in 2014, and they are suing the carrier for $477,000. In reply to the complaint, Verizon said that the damages were caused by “an act of God, and were not in reason preventable by human foresight, strength or care.”

North Adams Tower Company, alleges that Verizon upgraded its equipment on a North Adams Florida Mountains 150-foot self-supporting tower and the additional wind loading caused it to collapse during a storm on March 29, 2014.

The lawsuit, available here, originally filed in Berkshire Superior Court, was moved to U.S. District Court and then returned to Superior Court on August 5 as it awaits a new court date.

When the tower collapsed it struck an adjacent tower which also fell.

North Adams Tower said that it has been notified of claims, actions, damages, liability and expense of its lessees and others with rights to use of the tower.

Verizon, according to the complaint, “negligently performed construction, maintenance, repairs and modification to the tower”.

The agreement stated that “Lessee shall exercise special precautions to avoid damage to the Tower and to the equipment and other property of Lessor and the other lessees at the site and assumes all responsibility for any and all loss and expense from such damage caused by Lessee,” and that Verizon would indemnify North Adams Tower.

In 2013, North Adams Tower had an agreement with Verizon that the carrier, at no expense to North Adams Tower, would reinforce the tower, according to the plans detailed in the lawsuit, and would then be authorized to install and maintain, at no additional cost to Verizon, additional lines and antennas.

News reports regarding the collapse which took out emergency services communications in the area as well as more than 12 tenants on the tower, said that there was snow and wind speeds that gusted to 70 mph.

However, according to historical weather data from Williamstown, about five miles from North Adams, the maximum wind speed was 32 mph and the maximum gust speed was 44 mph with no ice reported as shown in photographs that were taken immediately following the collapse.