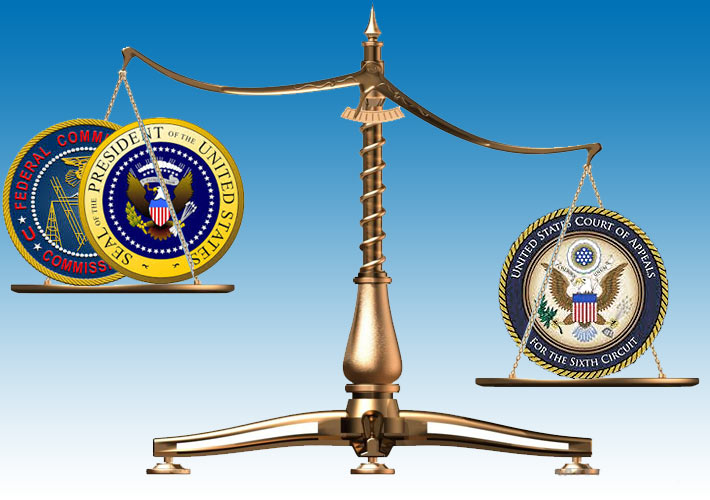 The FCC had been prodded by President Obama to strike down state laws restricting the growth of municipal broadband networks, but the U.S. Court of Appeals for the Sixth Circuit weighed in and stripped the FCC of its ability to meddle with state laws.

A circuit court of appeals dealt a severe blow to the Federal Communications Commission when it ruled today that the agency could not preempt state laws that restrict the growth of municipal broadband networks.

In February 2015, the FCC voted to block laws in North Carolina and Tennessee that prevent municipal broadband providers from expanding outside their service areas.

Chairman Tom Wheeler, claimed his agency could preempt the laws because Congress gave the commission authority to promote telecom competition by removing barriers to investment, but the Sixth Circuit Court of Appeals in its Aug. 10, 2016 decision decided that the FCC has no authority to overturn state laws.

“The FCC order essentially serves to re-allocate decision-making power between the states and their municipalities,” wrote Justices John Rogers, Joseph Hood, and Helene White who reversed the FCC’s decision.

“This is shown by the fact that no federal statute or FCC regulation requires the municipalities to expand or otherwise to act in contravention of the preempted state statutory provisions. This preemption by the FCC of the allocation of power between a state and its subdivisions requires at least a clear statement in the authorizing federal legislation. The FCC relies upon § 706 of the Telecommunications Act of 1996 for the authority to preempt in this case, but that statute falls far short of such a clear statement. The preemption order must accordingly be reversed,” the Justices said.

The month before the FCC blocked North Carolina and Tennessee’s laws, President Obama prompted the FCC to help cities that were encumbered by approximately 20 states that had laws that had restrictions against municipal fiber optic networks.

Pai is pleased and Wheeler says he’ll keep fighting
Commissioner Ajit Pai had previously warned his fellow commissioners that the FCC lacked the power to preempt the Tennessee and North Carolina laws and that doing so would usurp fundamental aspects of state sovereignty.

“I am pleased that the Sixth Circuit vindicated these concerns. The court’s decision is a big victory for the rule of law and federalism—a constitutional principle that lies at the heart of our system of government. Today’s decision also represents an opportunity for the FCC to turn the page. Rather than wasting its time on illegal efforts to intrude on the prerogatives of state governments, the FCC should focus on implementing a broadband deployment agenda to eliminate regulatory barriers that discourage those in the private sector from deploying and upgrading next-generation networks,” said Pai in a statement.

“While we continue to review the decision, it appears to halt the promise of jobs, investment and opportunity that community broadband has provided in Tennessee and North Carolina,” said Wheeler in his statement.

“In the end, I believe the Commission’s decision to champion municipal efforts highlighted the benefits of competition and the need of communities to take their broadband futures in their own hands. “In the past 18 months, over 50 communities have taken steps to build their own bridges across the digital divide. The efforts of communities wanting better broadband should not be thwarted by the political power of those who, by protecting their monopoly, have failed to deliver acceptable service at an acceptable price.”

AT&T Senior Vice President Jim Cicconi said in a statement about the court’s ruling,”This case was never about the best way to get broadband into rural communities, it was about whether the FCC had legal authority to pre-empt state law. Despite clear Supreme Court precedent, and without explicit pre-emption authority in the statute — which the Supreme Court has said is necessary — the FCC nonetheless went forward.”

The full court decision can be read here.

Wireless Estimator will be providing updates to this story as the industry reacts to the decision.