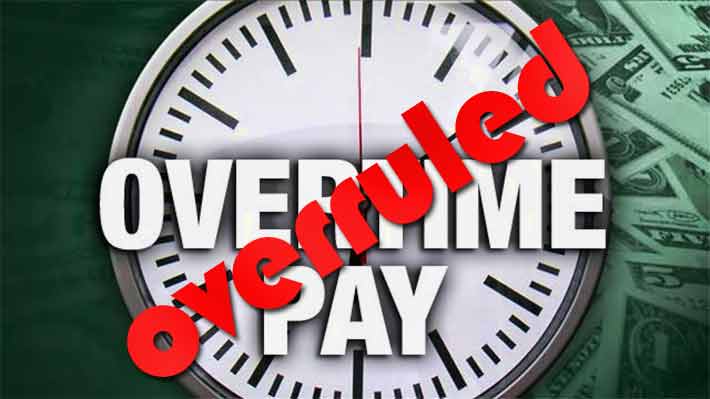 Coal in the stocking for some employees, a New Year’s present for their employers

Many wireless industry workers in office management and construction-related positions earning more than $455 per week who were exempt from overtime pay, were assured of an increase in their paycheck beginning Dec. 1, 2016 when a new federal regulation kicked in.

But two days before Thanksgiving, a time when workers can enjoy their blessings and look forward to what appeared to be for many a guaranteed increase in pay the following week, a federal judge in Texas issued a nationwide injunction against the Obama administration’s new rule that made them eligible for time-and-a-half pay – or a considerable increase in their weekly salary – as much as $24,232 – to maintain their exempt status.

To be an exempt employee, according to the U.S. Department of Labor, there are three basic elements for consideration:

Directing the work of two or more employees is the most often-abused requirement used by employers to exempt an employee for overtime.

In 2014, President Obama set in motion the new rule to “modernize and streamline the existing overtime regulations for executive, administrative, and professional employees.” The final rule was published on May 23, 2016.

Yesterday’s injunction against the rule, stating that the Obama administration had exceeded its authority, was praised by business groups who maintained that the new rules would be costly and result in fewer hours for workers.

“We strongly disagree with the decision by the court, which has the effect of delaying a fair day’s pay for a long day’s work for millions of hardworking Americans,” the labor department said in a statement.

“The department’s overtime rule is the result of a comprehensive, inclusive rulemaking process, and we remain confident in the legality of all aspects of the rule.”

The injunction is a temporary measure until Judge Amos L. Mazzant lll can issue a formal ruling, but according to legal scholars, the judge’s language indicated he was likely to strike down the regulation.

The DoL could appeal the ruling, which might end up at the U.S. Supreme Court.

The new rule could have seen some employers converting salaried employees to hourly workers, in some cases cutting their base pay to offset the overtime expense.

One major wireless contractor’s HR director, requesting anonymity, informed Wireless Estimator that her company has already raised wages for a few managers ahead of the rule taking effect. “It’s unlikely that we’ll be reviewing those increases in salaries,” she said. “It’s probably something we should have done before being forced into it by the new law.”

According to the U.S. Wage and Hour Division (WHD), exemptions do not apply to manual laborers or other “blue collar” workers who perform work involving repetitive operations with their hands, physical skill and energy such as construction workers.

When the WHD asked for public comments on their proposed rule they received 293,394. An overwhelming majority of trade organizations strongly opposed the changes. Wireless industry organizations were noticeably absent in addressing the rulemaking.

The Associated General Contractors of America (AGC) had been in opposition of the rule, stating that the proposed salary increase was too much to absorb at once and the threshold did not take into account lower wage regions of the country.

The trade group also said that construction employers would be forced to take drastic measures to comply with the rule.

AGC took a survey of human resource professionals of construction employers who identified measures employers will have to make to maintain their compensation budgets. Those measures included:

In September, wireless turfing contractor Goodman Networks Inc. agreed to pay $2 million to former construction managers who claimed the company should have paid them overtime pay, but misclassified them as exempt employees.

The complaint against Goodman said the construction manager’s primary duty is “to inspect worksites and report to supervisors who hold decision making authority.”

The lawsuit said the construction managers were not exempt employees because their routine inspection duties did not require significant discretion or independent judgment.

The current minimum salary level of $455 per week required to be exempt translates to $23,660 per year. This level was established in 2004, and represented a significant increase from the $155 per week ($8,060 per year) minimum that had been the standard for the preceding 30 years.