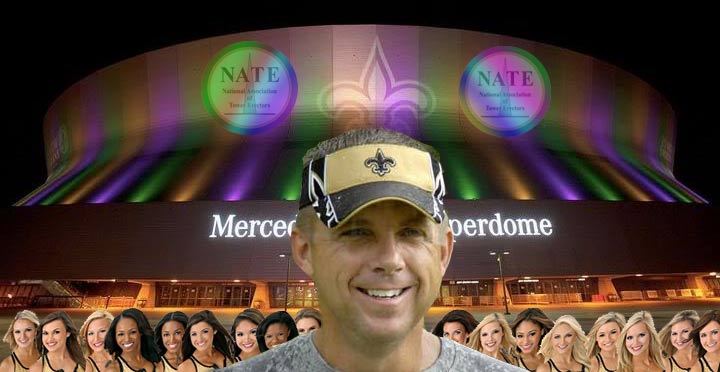 The Superdome has been the venue for seven Super Bowls, five Final Fours and it hosted the NATE reception on Monday along with some members of the Saintsations. New Orleans Saints Head Coach Sean Payton provided the Association’s keynote speech today during a record-breaking luncheon audience.

Payton became the 10th full-time coach in New Orleans Saints history in 2006 and was named AP NFL Coach of the Year that same year. In 2009, Coach Payton led the Saints franchise to its first and only Super Bowl Championship. 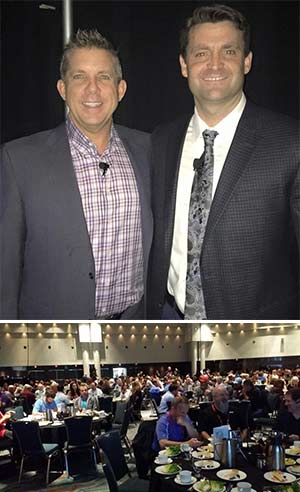 Payton shared his motivational message consisting of leadership insights and perseverance with a capacity crowd and engaged audience of NATE stakeholders from throughout the wireless industry. He also conducted an autograph and photo session immediately following the keynote address.

He said that the winning formula for all workers is to have a sense of humor, be able to accept constructive criticism, and  improve themselves.

“You’ll be  employed a lot longer if you can do a number of tasks,” Payton said.

Payton’s appearance at NATE UNITE 2016 was part of a dynamic partnership forged between NATE and the New Orleans Saints. Earlier in the week, the NATE UNITE 2016 Welcome Reception was held in the Mercedes-Benz Club Lounge at the Mercedes-Benz Superdome, the home stadium of the Saints. Additionally, members of the Saintsations – the official dance team of the New Orleans Saints, were on hand at the Monday evening reception to greet and enhance the experience of attendees.

“Coach Payton’s keynote appearance at NATE UNITE 2016 was well-received and was icing on the cake in terms of making this year’s conference the best event the Association has ever hosted,” stated NATE Trade Show Committee Chairman Joel Hightower of Hightower Communications, Inc. in LaGrange, N.C.

NATE UNITE is widely regarded as the premier event in the wireless and broadcast infrastructure industries.